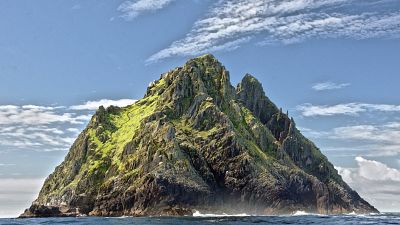 With its lyrical local accents and congenial character, it’s no wonder Ireland occupies such a sweet spot of the global imagination.

But behind the stereotypes, Ireland is a country rich in culture and full of fun. Dublin may be the big draw for stag and hen parties but beyond that there’s a wealth of experiences to be had, whether you enjoy the great outdoors or city breaks.

I’m a journalist for Euronews Travel and I’ve loved visiting family in Ireland ever since my childhood. I’m here to guide you through a nation so filled with warmth that you won’t even realise it’s raining (and it probably will be).

The best way to experience Ireland

Intercity travel is doable by train but the best way to see the Irish countryside is on foot or bicycle. Places like Connemara National Park have cycling tours and there are some experiences, like Ring of Kerry, which are most commonly driven. As you might expect, some of the more remote locations aren’t as easy or accessible for public transport, so it’s best to plan ahead.

When to visit Ireland

All year round! But seriously, if you’re not bound by school holidays I would recommend the spring (March to May) or Autumn (September - October). Tourist areas can be crowded throughout the holidays and during those times the weather will be a little milder.

Top 10 must see places in Ireland

A contender in terms of history and nightlife, Dublin has as many restaurants and watering holes as it does tourist sites, all of which can be seen using the hop-on hop-off bus tour.

Lively and nonconformist, Galway is a central hub for culture and culinary expertise with an atmosphere as vivacious and colourful as its signature architecture.

Covering north west Galway, Connemara is uniquely beautiful and boasts one of Ireland’s unmissable national parks filled with wildlife, as well as the ruins of a gothic castle and the picturesque island of Inishnee.

A hidden gem on the north west coast County Donegal has some of the best beaches in Ireland, not to mention gorgeous views and friendly locals.

UNESCO world heritage site older than Stonehenge and the Great Pyramids of Giza, this neolithic ‘passage tomb’ is adorned with ancient art.

Featured in the Harry Potter series and the Princess Bride this cinematic setting offers visitors their own magical experience.

Ireland’s second city is stunning and a fantastic base to see the rest of the beautiful ‘rebel county’. Built on an island, this university town has plenty of museums and cultural hubs.

A picturesque bay which is home to Ireland’s National Folk Theatre.

Ireland’s medieval capital, a must see for site seers

Perfect for surfers with amazing waves and beaches as well as something for the art lovers in The Model.

Donegal is the most underrated place in Ireland, if not the world. It is absolutely stunning and if you’re ever there you should definitely go to Tramore Strand, a breathtaking beach which will make you feel like you’re on the edge of the world.

When I was a kid we used to camp near there and it was sensational, even if at the time I didn’t think much of the weather.

In the same part of the country is Lough Finn which is a gorgeous fresh water Lough, again stunning scenery and not too far from the large(ish) town of Glenties where amusingly everyone has the same name as me.

The Ring of Kerry is a 180km circular route that can be driven in 3.5 hours but also features sections suitable for the more resilient hiker. Boasting a 7th century monastery and one-of-a-kind scenery, you’ll come for the Instagrammable moments but probably forget to take your phone out.

Powerscourt Estate is an absolutely stunning stately home in Enniskerry, Wicklow that has gorgeous gardens and is only a 6km walk from the highest waterfall in Ireland. Make sure you grab a bite to eat at the Avoca Terrace Cafe which has some of the most breathtaking views in the country.

Trinity College, Dublin was around long before Sally Rooney made it the most likely place to have an on/off love affair and the Old Library is the must see attraction where historical Greek, Roman and Celtic texts meet. Come here to soak up some knowledge and spend some in the stately and historic long room.

What can I do for free

In Ireland, outdoor activities and views are so plentiful it seems odd to ask what is free. However, if you’re looking to save some coins in Dublin, take a walk next to the River Liffey. Forget the Seine and the Venice Canals, this is Europe’s most romantic and characterful waterway.

After you’ve had the cursory pint of Guinness you should definitely sample some of Ireland’s fresh seafood. If you’re in Galway have some oysters, but most of the coastal towns I’ve mentioned will have fresh catches on the menu.

This may sound a bit mad but I would recommend camping in Ireland. If you’re going for the great outdoors it will definitely add something to your experience and help you get up close and personal with the character of the countryside. It also doesn’t have to be that basic with some amazing spots to choose from.

A general rule of thumb is always chat to locals about where to go. It sounds like a cliche, but people in Ireland are so hospitable and friendly, and always willing to help.