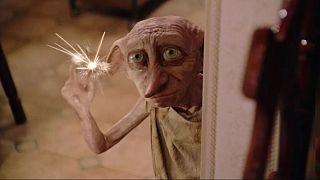 Who is more beloved from the Harry Potter series than Dobby the House Elf?

No one, that’s who. When that poor lil’ elf met his unfortunate end, millions of children and adults worldwide shed a tear over their tomes.

When Dobby died in the movies, the elf’s burial scene was filmed at Freshwater West beach in Pembrokeshire.

In typical Potter fan behaviour, the spot has since become a public shrine to the house elf.

A grave paying tribute has been surrounded by pebbles and socks, representing the piece of clothing that frees Dobby from servitude in the story.

But National Trust Wales, concerned with the impact on the environment, recently ran a consultation asking whether Dobby’s grave would need moving.

The beach is a legally protected conservation area, with unique wildlife including large grey seals, harbour porpoise, and seabirds.

After a consultation with the public, National Trust Cymru say Dobby's grave can stay on Pembrokeshire's Freshwater West. But they're asking visitors to leave no trace after paint chips and socks have been damaging the natural environment here. pic.twitter.com/Ydea3WRmqr

Thankfully, the consultation has come back saying that Dobby’s grave won’t be moved.

The National Trust Wales have asked that fans of the cute critter to come and only take photos of the site. "Items like socks, trinkets, and paint chips from painted pebbles could enter the marine environment and food chain and put wildlife at risk."

Here are some of our other favourite pilgrimage sites for cultural heroes.

The Irish wordsmith could put together a quip of astounding beauty and sneering wit unlike any other. He was in turn romantic, his life tragic, and always inspiringly brave.

It’s only natural then that the poet’s grave is in Père Lachaise Cemetery, slap-bang in the centre of the city de romance, Paris.

Unlike the typically gothic graves surrounding it, Wilde’s grave is an art deco masterpiece based on his poem ‘The Sphinx’ and designed by sculptor Jacob Epstein.

Since his death, a tradition has emerged to kiss the grave. Thousands of visitors every year would apply lipstick and leave a big old smack on the stone. Others have written love notes to Wilde on his tomb.

Ever the romantic, Wilde would probably approve. But the people in charge of the tomb’s upkeep got quite annoyed. The graffiti was surprisingly fine, but the fats in the lipstick was causing permanent damage to the stone.

First a penalty of €9,000 was implemented. It was to no avail. Most could get their kisses in quicker than any guards could give them the fine.

So instead, the grave now has a clear plastic kiss-barrier in front of it. People still give the barrier a kiss, but it doesn’t feel the same really.

In the mid-2000s, ‘Doctor Who’ was the biggest show on British television and so a spin-off was needed. Enter ‘Torchwood’, a more adult version of the show with sexy violent themes.

Because Torchwood was more comfortable with gruesome deaths, when one of the fan-favourites of the show, Ianto Jones, met his untimely demise, fans were devastated.

Just got back from putting new tributes on Ianto's Shrine. I hope you can see the difference. The first one is before and the second one after. pic.twitter.com/UaUlxXYTH4

In Cardiff city centre, where the show was set, Ianto’s shrine has pride of place with tons of letters, photos, poems and more decorating it.

It even has its own Twitter account that keeps you updated with the status of the pure Ianto Jones’ memorial.

The forest of fictional funerals

In Italy, if you go into the woods, you might come across a big surprise.

In Piedmont, an artistic collective has created a cemetery for all the fallen fictional heroes they believe deserve a final resting place.

The Eredi Brancusi Foundation was created when Romanian sculptor Costantin Brancusi, who died in 1957 started creating artistic interpretations of fictional character’s graves in a forest in the Cuneo area.

Ever since the first Brancusi started making these fictional graves, his whole family has joined in on the fun.