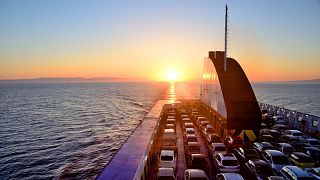 A direct ferry link between Scotland and mainland Europe is set to reopen next year.

Those travelling between Scotland and Europe currently have to rely on flights, or on a multi-leg train journey.

But passengers may soon have another, climate-friendly option.

From April 2023, a ferry will operate between Rosyth - a small port 40 minutes from Edinburgh - to Zeebrugge, on Belgium’s northern coast.

The route carried passenger services until 2010, and freight until 2018 but it was shut down by a fire onboard one of the ships.

The new route will primarily be used for freight. However, the operator has hinted that travellers could soon be welcomed onboard, too.

How long will the Scotland to Europe ferry take?

The journey will take roughly 20 hours, with boats travelling at around 21 to 22 knots (around 40 km/h).

The route will initially be used for cargo alone. But the mayor of Bruges Dirk De Fauw has indicated that passengers will eventually be welcome.

“I’m happy to see an alternative to the old Zeebrugge-Hull link to the UK,” mayor De Fauw told local reporters.

“Rosyth is located not far from Edinburgh and Glasgow. These are cities with populations of 650,000 and 2 million respectively.

“[The new link] would be very important for tourism in Bruges and, by extension, in the whole of West Flanders”.

DFDS and Ptarmigan Shipping - the operators who would service the route - also hinted at this possibility.

“A further study is being carried out regarding the passenger business,” they said in a statement.

The revival of the ferry could yield environmental benefits.

Ferries aren’t perfect for the planet - they often run on diesel and can spew dangerous particulates into the air. Nonetheless, they don’t produce nearly as much greenhouse gas as flying.

Supporters of Scottish independence from the UK remain defiant