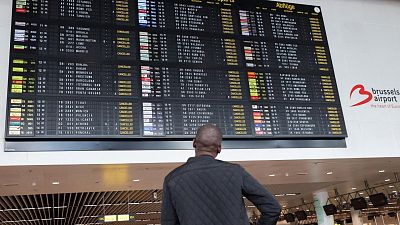 A flight information board shows cancelled flights due to a strike of security guards on June 20, 2022 at Brussels's international Airport.   -   Copyright  François WALSCHAERTS / AFP
By Rosie Frost  •  Updated: 24/06/2022

Cancellation, delays and hours-long queues are already having an unavoidable impact on summer travel across Europe.

Sweeping job and pay cuts during the pandemic are behind much of the disruption. But it isn’t just passengers that have been affected by staff shortages as now, unions across the industry are calling for strikes over working conditions.

Europe’s low cost airlines are likely to be among those worst affected by the upcoming staff walkouts.

Last minute cancellations and general disorganisation at easyJet have even led unions to claim crew members face a “serious safety risk,” unwillingly working on days off to prevent further disruption.

So what do we know so far about the airlines and airports which could be impacted by strikes this summer?

When are Ryanair workers striking?

Ryanair staff are planning to strike across a number of European countries in June and July.

Crews from Portugal are also demanding better working conditions for staff and will be on strike on 24, 25 and 26 June.

Trade unions in Belgium say they have been forced to take action as Ryanair is not respecting labour laws. As a result, they are planning to walk out from 24 to 26 June. Brussels Zaventem Airport already had to cancel all departing flights on Monday during action from security staff.

Italian staff have called for a 24-hour strike on 25 June, joining their colleagues in Spain and Portugal.

And in France, unions have threatened action on 25 and 26 June with several airports expected to be affected.

When are easyJet workers striking?

EasyJet cabin crew based in Spain will go on strike for nine days in July, according to the Unión Sindical Obrera (USO).

Flight attendants are protesting low wages, demanding a 40 per cent increase in their basic salaries. USO says it represents around 80 per cent of the 450 easyJet staff based in Spain and hopes to reach an agreement to avoid strike action in the first place.

When are British Airways workers striking?

British Airways (BA) ground and cabin crew voted last week on whether to back industrial action over wages.

Unite, a union which represents around 16,000 staff who work for the UK airline, says there was a 97 per cent majority in a consultative ballot about strike action.

It added that thousands of experienced workers had been dismissed during the pandemic leading to a shortage of check-in, loading, baggage handling and cabin staff.

Around 700 BA ground crew working out of the airline's main hub at Heathrow have now announced they will walk out next month. No dates have been confirmed yet but the unions will have to give the airline 14 days' notice meaning the earliest they could take place is the 8 July.

Many of those who voted for the strike were low paid women. They are demanding that the airline reinstates a 10 per cent pay cut imposed during the pandemic.

When are SAS workers striking?

Around 1,000 Pilots from Denmark, Norway, and Sweden’s flag carrier, Scandinavian Airlines could walk out in late June over wages and cost-cutting measures.

They are currently in talks to try and prevent the industrial action but Danish pilots could go on strike from 24 June. They may wait until 29 June when Swedish pilots will be able to join them as they are limited by local regulations.

Where else are aviation strikes taking place this summer?

After walking out on 9 June, causing a quarter of departing flights to be cancelled, ground staff from Aéroports de Paris are planning further action on 2 July. The company operates both Charles de Gaulle and Orly airports in Paris.

The action is being coordinated by several French unions and could cover all staff at both Paris airports including security personnel. They are demanding a general salary increase of €300.

A French pilots union has also called for a one day strike to protest what it claims are the “mounting safety risks” of increasing capacity during the busy summer season. Alter, which represents just over 10 per cent of Air France pilots, has planned a walkout on 25 June.

Air France and its low cost arm Transavia say they don’t expect any disruption to their flight schedule during the action.