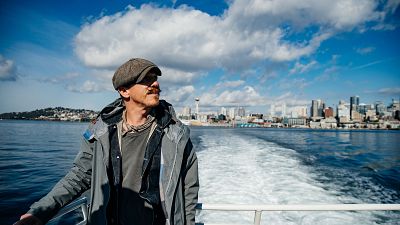 Acclaimed Northern-Irish singer-songwriter Foy Vance travelled around the US on the trail of music, history and culture. When he washed up in Seattle, Washington, he discovered a city with a distinctly independent spirit.

For Foy it’s Seattle’s location that makes it so unique: “There’s no city like it in all the States. Seattle, Washington is literally at the very edges of America, way up in the north-west corner of the country. There’s something amazing that comes from a city being off on its own, it’s something you can feel when you’re there.”

Seattle has been inhabited for at least 4,000 years and the larger Puget Sound region for some 12,000 years. It was in 1851 that European settlers first arrived, choosing to lay out their town near a Duwamish Indian village. The new town was later named Seattle to honour the leader of local American Indian tribes, Sealth, who had shown considerable hospitality to the settlers.

“Today Seattle is nicknamed the Emerald City,” Foy explains, a title that comes from the city’s stunning scenery: green all year round with its views on the snowcapped Mount Rainier. “When you visit you’ll feel like you’re discovering a hidden gem.”

Twentieth-century Seattle is a hotspot for knowledge and high-technology industry and is responsible for global giants Starbucks, Amazon, Boeing and Microsoft. Yet these companies didn't start out gargantuan. Amazon, for example, began its life being run out of founder Jeff Bezos' garage. Starbucks started out in 1971 as a single Seattle store, selling roasted whole coffee beans. It was only by 1986 that they started to sell brewed coffee.

While it’s the birthplace of some large brands, today Seattle retains its small scale vibe and is home to countless micro-brands, from independent bookstores to numerous independent coffee houses such as Analog Coffee, to the traders who sell their wares in Pike Place Market. This is a city where small is definitely beautiful.

Not to be missed: our favourite Seattle destinations

This was not Foy's first visit to Seattle, Washington, and he felt instantly at home there: "the people seem a bit Northern-Irish to me: they're a bit cynical and savvy and they know their music". Here are some of his recommendations for things to do in the city:

1.Easy Street Records is Foy Vance's top spot in Seattle. "It's the coolest record store in the world," he says of the place where Pearl Jam performed their longest ever gig. The venue is more than a record shop, with a stage, a bar, a kitchen and a pool hall. "There's killer music on there all day," Foy says.

2. It was the soaring price of onions in 1906 and 1907 that created the conditions for Seattle's Pike Place Market. City Councilman, Thomas Revelle proposed the creation of a public marketplace where farmers could sell directly to consumers, and the new market was an instant success. It still flourishes today and there is no better place for visitors to get a sense of the flavour of the city.

3.Seattle's Space Needle is iconic, instantly recognisable around the globe. Its futuristic design was created for the 1962 World Fair when it seemed that man's drive to explore space had no limits. Visitors to the "top house" are treated to 360-degree views of the city, Mount Rainier, Puget Sound, the Cascades and Olympic mountain ranges. Recent renovations mean that, amongst other things, the building now has a revolving glass floor.

4.The KEXP Gathering Space is a unique place that allows people to connect over a love of music and art. The venue incorporates a hangout area and coffee shop, a record store and exhibition space, all built around the KEXP radio show studio booth which looks out over the room. Go there to get a behind-the-scenes tour, check out a free live performance, or simply to soak up the atmosphere.

5.The Museum of Pop Culture is worth a visit just to see architect Frank Gehry’s bold, colourful structure, apparently modelled on a smashed guitar. Inside you’ll discover exhibitions dedicated to the impact of the creative works on our lives, from science fiction and pop music to fashion and video games. With its interactive, hands-on experiences and ever-changing exhibitions, it’s a destination like no other.

Seattle is the birthplace of grunge, and this genre still reigns there, but other forms of music thrive, too.

Detroit, Michigan: the city with a creative heart and a Motown soul

Up-beat and down to earth: Cleveland, Ohio