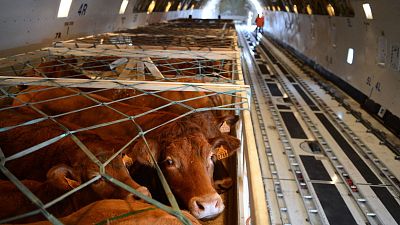 The image - featuring a cow turned into a leather handbag - asks travellers “was she killed to make your carry-on?”

But every single airport rejected the image, with some warning that the ad was too “political” or risked “potential negative customer reaction.”

“The public deserves to know that behind every leather bag is a sensitive individual who died a painful death,” says PETA Director Elisa Allen.

“Vegan leather doesn’t come with the emotional baggage of knowing an animal was killed for it, so PETA calls on everyone to consider the gentle cows who are carved up for leather and stick to cruelty-free carry-ons.”

The advert has previously appeared on airport trolleys in the United States.

A recent PETA exposé of the global leather industry found that animals are denied food and water during gruelling journeys to abattoirs, are often electroshocked and beaten, and are still conscious once they die.

The leather industry is also bad for the environment. Raising cows for use in leather - as well as for meat and dairy - is a major contributor to both deforestation and methane emissions.

According to the World Bank, cattle ranching is responsible for over 80 per cent of Amazon deforestation in the last 50 years.

Cattle ranching is responsible for more than 80 per cent of Amazon deforestation over the last 50 years.

The leather industry is also particularly carbon-intensive, with every square metre of the material generating around 110kg of CO2.

Turning animal skins into leather involves the use of around 130 different chemicals, including cyanide and formaldehyde.

In the EU, commercial leather tanning is limited. But in countries where there are fewer restrictions - predominantly in the Global South - the chemicals wreak environmental havoc.

Leather tanneries are the main source of river pollution in Nicaragua’s second-largest city, León, for example.

PETA has urged consumers to turn to vegan leather alternatives.

“With the global vegan leather market expected to grow to over £35 billion (€41 billion) by 2025, there are now more sustainably produced animal-free leather options than ever, including natural fabrics made from "pineapple leaves, apples, and mushrooms,” the organisation said in a statement.