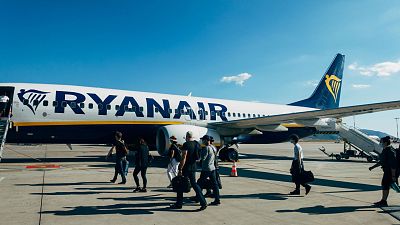 Ryanair is one of the airlines that has been forced to cancel flights today   -   Copyright  Marcus Wexler / Pexels
By Charlotte Elton  •  Updated: 08/06/2022

Faced with a cabin crew walk-out, multiple budget airlines have cancelled Wednesday flights to and from Italy.

In statements, both airlines promised to do “all they can” to minimise disruption, but insisted that strike action is “outside of (their) control.”

The industrial action comes after weeks of chaos at European airports, with travellers trapped in snaking queues for up to seven hours.

Why are Italian airline workers on strike?

Pilots and flight attendants of Volotea, EasyJet and Ryanair (including sister airlines Malta Air and Crewlink) will walk off the job between 10am to 2pm (CEST) today.

Meanwhile, air traffic controllers at multiple Italian airports will strike for an entire 24 hours, returning to work on June 9.

In a joint statement, the unions blamed poor pay conditions for the Industrial action.

“Among the issues are… arbitrary reductions of paychecks, the non-payment of sick days, the company’s refusal to grant leave during the summer season, and the lack of water and meals for the crew,” the statement read.

This will be only the first of a series of protest actions that will make the summer 'hot'.

UILT said that if an agreement is not reached, “this will be only the first of a series of protest actions that will make the summer ‘hot'”.

Impacted airlines have advised travellers to check their flight status before arriving at the airport.

What’s going on in European airports - and when will queues get better?

The strikes are the latest issue to beset European airports.

The entire industry is facing severe staff shortages, after more than 191,000 European aviation workers were made redundant during the pandemic.

As travel demand surges, airports and airlines are ill-equipped to handle the influx.

British Airways was forced to scrap 8,000 flights in its March-October schedule, while EasyJet recently cancelled 240 flights between 27 May and 10 June.

The aviation industry has launched a recruitment drive, but Air Council International - Europe's trade body for airports - has predicted that delays are inevitable at two-thirds of European airports this summer.