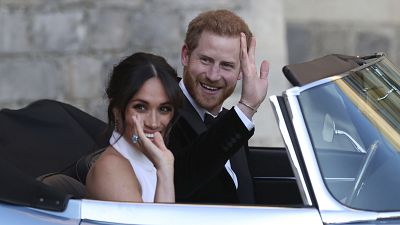 The Duke and Duchess of Sussex will receive an unusual present today for their third wedding anniversary.

Tradition dictates that a couple’s three-year anniversary involves leather items as gifts, which is why animal-rights charity PETA has sent Harry and Meghan matching pairs of vegan leather trainers.

As the Sussexes continue to establish their new life in California, PETA hopes to help the couple “hit the ground running” with an animal-friendly alternative to the Duchess’s usual casual shoes of choice.

“We know how much you care about animals and the environment,” writes PETA founder Ingrid Newkirk in the accompanying letter to Harry and Meghan, “unlike the leather industry, which kills over one billion animals every year and whose end product is ranked the most polluting material in fashion.

“We therefore sought to mark your special day in a modern, eco-conscious, and animal-friendly way. We hope you love the gift and that the shoes will inspire you to continue to embrace vegan fashion.”

The vegan trainers typically retail for around €85, and are a reworking of the iconic Adidas Stan Smith design. The shoes are also made with recycled fabrics and totally free from virgin polyester.

The leather-making process is particularly carbon-intensive, compared to other fabric production.

Turning animal skins into leather involves using around 130 different chemicals, including cyanide and formaldehyde. In fact, commercial leather tanning is limited in many countries like the US and across the EU, due to its safety risks.

Instead, much of the commercial leather used around the world is produced in countries with fewer restrictions, predominantly in the Global South. This has led to environmental damage in these countries, for example in Nicaragua’s second-largest city, León, the main source of river pollution comes from the tanneries.

As well as the environmental impacts, workers in tanneries are exposed to toxic chemicals with dangerous repercussions. Studies have found that tannery workers are at a 20-50 per cent higher risk of developing cancer.

There are also animal welfare concerns involved with leather. A recent PETA video exposé of the world’s largest leather producer found that the cows and bulls used in the process were electroshocked, beaten, and branded on their faces before being killed for their skin.

Raising cows for use in leather - as well as for meat and dairy - is well-documented as being a major contributor to both deforestation and methane emissions. According to the World Bank, cattle ranching is responsible for over 80 per cent of Amazon deforestation in the last 50 years.