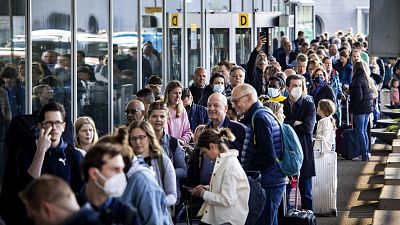 We’re all hungry for a holiday. With entry rules coming to an end in many countries and anxieties around travelling easing, a lot of people are hoping to get away this summer.

But the excitement of going abroad has been marred by airport chaos, cancelled flights and hours-long queues. Though travel restrictions may be easing, the recent problems at airports are leaving many uncertain if they should book at all.

So with airlines saying it is very difficult to predict what will happen in the next 12 months, we went to Routes aviation conference to find out their thoughts on travel in the next year.

Will airport chaos continue this summer?

The bad news is that the chaos seen in airports across Europe in recent months looks like it is set to continue.

Airlines are working hard to reshuffle their teams to have enough staff on-hand but as passenger numbers increase over the summer, the problem may get worse. And they say it is mainly to do with staff shortages at the airports where they operate.

Managing director of Airlines For Europe Thomas Raynaert says there is no short term solution. People left the industry during the pandemic for other sectors with better pay, more satisfying work and better conditions. There’s little chance that they will come back.

Because it takes time to train staff in roles like security and baggage handling that are currently lacking people, the problem won’t be fixed quickly.

He added that it was “unprecedented” to see an airport asking airlines to cancel bookings and reservations into the future - as happened at some airports during the chaos earlier this year.

Why is there so much disruption at Europe’s airports?

Passenger numbers in March were up to 75 per cent of what they were pre-pandemic, IATA says, showing the aviation industry is recovering. Schvartzman explained that this could mean a return to 2019 numbers as early as 2023.

“This is a sign of what is to come this summer,” he said, with projections for a very strong season. But it doesn’t seem like some airports are ready for this increase in traffic.

Many industry experts pointed to Schiphol Airport in Amsterdam as an example of this under-preparedness. The airport authority here has warned that it will be very busy there every day up to and including summer due to staff shortages.

People have waited two, sometimes three years for a holiday and that should not be ruined by a lack of preparedness.

Staff are threatening strikes due to the working conditions, queues have led to outbreaks of violence and Dutch flag carrier KLM has had to temporarily suspend ticket sales due to the chaos.

“People have waited two, sometimes three years for a holiday and that should not be ruined by a lack of preparedness,” Schvartzman added.

Why is airport chaos a big problem for tour operators?

For those who have booked their flights directly with airlines, delays and cancellations are often fixed by taking another flight. But for people booking packages with tour operators, the situation can be a bit more tricky.

Rex Nikkels, airport procurement specialist for TUI, says that because hotels, transfers and other parts of the trip are booked together, it makes it hard to reschedule. It means that tour operators like them - and the people that book through them - have been some of the hardest hit by chaos at airports.

“We also had to get rid of people,” he says, explaining that they lost workers during the pandemic just like airports. “We are also short of staff for now, but we can manage.”

Nikkels says it means tour companies have taken a hit to their reputation because people are quick to blame them when all of the moving parts of a package holiday can’t be changed.

“This summer, we will face the same problems,” he adds.

Should you plan to arrive early when you fly?

It's easy to think that arriving super early for your flight is the solution when queues are ridiculously long.

But according to Nikkels, arriving too early can cause as many problems as arriving too late. People shouldn’t show up more than three hours before their flight as those turning up five hours or more before departure are simply adding to the queues, he says.

Most airlines are advising passengers not to arrive before the earliest time their check-in allows. It’s also worth making sure your passports are still valid - especially if you are travelling from the UK where post-Brexit rules are adding to the confusion and there have been delays on renewals.

One alternative, of course, is not to fly at all and take trains to your destination. Many European countries are rapidly investing in their railways to make train travel faster, cheaper and more comfortable. By avoiding airports, train travel is often less stressful and you can take in the scenery along the way.