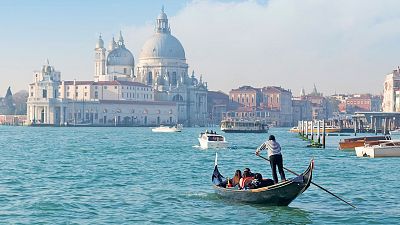 The 3rd of October, 2020, was a momentous day for Venetians.

A high tide had been predicted, which would normally have seen low-lying areas of the city under several inches of water. On this day, however, the streets remained miraculously dry.

The waters had been held back by MOSE (Modulo Sperimentale Elettromeccanico), a system of flood gates erected in the inlets of the lagoon, for the first time. Many people had prepared their rubber boots anyway, finding it hard to believe the system would actually work. But throughout the day, the streets remained free of water.

Since then, the canary yellow parapets that rise up and close off the mouths of the lagoon when a tide over 110cm is predicted have kept the water at bay multiple times. But flaws are already being exposed in this system lauded for having saved Venice.

Cultural leaders recently came together to pen a letter to the Italian prime minister Mario Draghi. They warned that the canal city is far from safe and it won’t be long before new flood defences will be needed urgently. And the chief culprit, they say, is climate change.

A system already out of date

Rising sea levels predicted for the not too distant future will put a big strain on the functionality of the flood barriers. Anna Somers Cocks, editor-in-chief of The Art Newspaper and one of the authors of the letter to the prime minister, explains that MOSE is woefully unprepared for higher sea levels.

This is because it was designed in the 1980s without the present-day understanding of climate change. It should have been finished decades ago but was dogged by delays due to corruption scandals and spiraling costs.

In the letter to the prime minister, the authors reference the regional projections published by the Intergovernmental Panel on Climate Change (IPCC) in 2021. They predict a rise in the mean sea level by 2100 of 28-55 centimetres in their most optimistic scenario of global warming - and 63-101 centimeters in the most pessimistic scenario.

“This means that, in their current operating mode, the existing barriers would need to be closed more than 260 times a year on average,” the letter reads.

Venice still does not have a comprehensive sewage system and relies on the tides to remove waste from the lagoon.

As such, a system that was the answer several decades ago is now unprepared for the current and future environmental situation. As Somers Cocks explains, too frequent closures that prevent the tidal exchange of waters between lagoon and sea “would turn the lagoon into a dead, stinking swamp.”

She adds that it is a little-known fact that Venice still does not have a comprehensive sewage system and relies on the tides to remove waste from the lagoon.

A lagoon in peril

A research team from the University of Padova has been analysing the effect of the MOSE barriers on Venice’s natural surroundings. Their findings, recently published in a report in Nature Geoscience, show the raising of the barriers is already causing problems.

The shallow Venetian lagoon is dotted with mudflats and marshes that are vital to the survival of the historic city. As Davide Tognin, one of the research team, explains, “They mitigate coastal flooding by buffering waves and storm surges, enhance water quality, filter nutrients and pollutants, take up atmospheric carbon at rates much larger than terrestrial ecosystems and constitute peculiar habitats for endangered species.”

In the report, the researchers warn that when the flood barriers are closed, they starve the lagoon's marshes of the vital sediment they need. Storm surges, in particular, are vital to mobilising the sand and silt and delivering it to the marsh surface, but MOSE is now likely to be activated in these weather conditions - thus preventing this distribution. “Without complementary interventions and management policies that reduce barrier activations,” the report continues, “the survival of coastal wetlands is even more uncertain.”

Tognin says it is difficult to determine when this negative impact will be visible, but “we can safely say it has already started as field data show a reduction in marsh sedimentation during the 2020-2021 fall season when the Venice lagoon began to be flood regulated.”

He adds, “Barrier regulation will shorten the ‘time to death’ of marshes, and this negative impact needs to be counteracted.”

One project hoping to mitigate this damage to the lagoon was launched last December. As part of the WaterLANDS consortium, coordinated by University College Dublin and funded by the €23m “New Green Deal” initiative, the NGO We are here Venice (WahV) is working on a project that “places the health of the Venice lagoon system back at the centre of development plans and policies determining the future of Venice.”

Jane da Mosto, an environmental scientist and founder of WahV, explains that the protection and restoration of Venice’s wetlands has always been an integral part of the organisation’s mission. The latest funding will be an opportunity to continue grassroots level work as well as “making stronger institutional links with the best available scientific knowledge to ensure the optimisation of public works to rebuild, expand, restore and protect the areas of salt marsh in Venice.”

Da Mosto’s project is an exception, however. There are some more outlandish ideas for how to protect Venice in the future like building a wall around the city and raising pavement levels.

There are some more outlandish ideas for how to protect Venice in the future like building a wall around the city and raising pavement levels.

But, as Somers Cocks says, most people seem content to hail MOSE as the solution and look no further. “So much political energy and grief and money have gone into MOSE that people are exhausted and don’t want to think that this is not the final solution,” she says. Not only does this leave Venice in imminent danger, but Somers Cocks sees it as a lost opportunity for the development of potentially global solutions to flooding caused by climate change.

Somers Cocks notes that in the Netherlands, scientists are already working on four different scenarios, including the most drastic, for the future of sea-level rise. Venice, too, could begin developing ambitious plans.

“I do believe that Italy is in a golden moment and changes are happening and money is available to make them happen,” she says. “I think that coming up with a plan to protect Venice and, by extension, the rest of Italy is a classic case of something that should be an international project and a collaboration between Italy and the EU.”

For Somers Cocks, establishing a long-term, coordinated and possibly international approach is fundamental to Venice’s future.