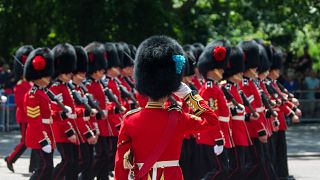 Get ready to party like royalty this June as Brits prepare for special four-day bank holiday weekend to celebrate Her Majesty the Queen’s Platinum Jubilee.

With hundreds of events marking Queen Elizabeth’s seven decades of service, it won’t just be monarchists celebrating - and London is the perfect place to join the royal shindig.

From street parties to sumptuous feasts and exhibitions, there are plenty of ways to get involved.

So crack out the Union Jack sunglasses, pack the picnic basket and raise a glass of champagne: here’s where to stay, eat, and party this Platinum Jubilee weekend.

What to do this Platinum Jubilee

The Trooping of the Colour at Buckingham Palace

Royal pageantry at its most extravagant. The parade – held to mark The Queen's official birthday on June 2 – will host more than 1,400 soldiers, 200 horses and 400 musicians.

An RAF fly-past will fill the sky with red, white, and blue jets, and the Queen herself will make a balcony appearance just before 1pm.

Tickets to view the spectacle from outside Buckingham Palace have already sold out, but The Mall is open to the public. To get a good spot you’ll have to arrive early. Extra-strong binoculars are advisable.

Where: The Mall, London

Price: Free viewing in The Mall

Superbloom at the Tower of London

For centuries, the Tower of London has hosted kings and queens – often against their will. Today, it houses the Crown Jewels, the magnificent regalia worn by Queen Elizabeth for her 1953 coronation.

This summer, the 13th century moat will be transformed into a spectacular wildflower meadow. With more than 20 million seeds planted, visitors can expect a stunning sea of flowers.

Not convinced? If 20 million blooms don’t do it for you, there’s always the 17.5 metre, four-lane slide that’s been built off the side of the ancient tower.

Where: Tower of London

When: Wednesday June 1 to September 18

Price: Tickets are free from the Superbloom Public Viewing Path, or £12 (€14) for the full slide experience.

Jubilee program at the Southbank Centre

Performing arts venue the Southbank Centre promises something for everyone this Jubilee – from classical concerts to hip-hop fusion maypole dancing.

“Whether you're looking to wave the Union Jack and belt out the national anthem or immerse yourself in the Pistols and punk of Jubilees past, we've got you covered,” their official event launch reads.

Where: The Southbank Centre

When: Wednesday June 1 to Sunday June 5

To see the Kings and Queens of the animal kingdom, head to Zoobilee at the ZSL London Zoo.

The massive menagerie will host a week of family-friendly royalty-themed events – including a massive teddy bear’s picnic guaranteed to delight even the fussiest little princes and princesses.

When: Saturday May 28 to Sunday June 5

Unpack the bunting for a Mayfair street party

Up and down the country, Brits will be unpacking the bunting for street parties, and London is no exception.

For an ultra-posh experience, head to upmarket Mayfair. Revellers at this party can expect food stalls, cocktails, music, and street performers.

It has been given the theme Let’s go fly a kite’ after the beloved Mary Poppins song and the event will see the roads closed to traffic all the way from Grosvenor Square to Oxford Street.

Break a record at the Wembley Park Jubilee dance party

The neighbourhood will host a day-long dance festival, with free classes, food trucks and performances from bubbleologists, stilt walkers, and pavement artists.

When: All day, Saturday June 4

You’re unlikely to see the real Queen herself this Jubilee weekend – so why not spend an afternoon with some of London’s most popular drag Queens?

The pair promise “impromptu dance routines, silly sing-alongs and witty royal repartee for all the family.”

Get a taste of British history at these Royal Exhibitions

Some of London’s best art galleries and museums are dedicating exhibitions to the Jubilee.

The British Museum is launching a special display of royal coinage. Sir John Soane’s Museum is showcasing royal memorabilia – from cups and plates to a jar of marmite and hair pins. The Imperial War Museum will host Crown and Conflict: Portraits of a Queen in Wartime.

Whatever your cultural tastes, there’s a museum for everyone looking to find out more about the history of the UK monarchy.

When: Over the weekend

Where to eat and drink this Platinum Jubilee

Jubilee Lunch in one of London’s Pubs

In honour of Her Majesty, pubs in England and Wales can extend their closing time to 1am on 2, 3 and 4 June - two hours later than normal.

With more than 3500 pubs in London, you’ll be spoilt for choice. Head to the aptly-named Queens Arms in Pimlico for a Sunday lunch, or raise a glass at the Queen's Head in Clerkenwell. Just make sure to toast her Majesty!

Afternoon Tea at the Sloane

Afternoon tea has been a quintessentially English experience since the mid 19th century.

Visit The Roof Terrace at The Sloane from Wednesday 1 to Sunday 5 June for a high-class version of this delicious tradition. Expect moreish finger sandwiches, delicate pastries and traditional scones.

The restaurant promises “innovative flavours” inspired by the German and Javanese heritages of the Executive Chef, Bernhard Mayer, and Head Chef, Maryono Maryono. All you’ll need to bring is your appetite.

Coronation favourites at The Goring

Sumptuous hotel The Goring has a rare Royal Warrant - a mark of recognition to people or companies who have regularly supplied goods to the monarchy.

Ahead of the 1953 coronation, the five-star establishment housed visiting royalty from around the world. It still claims the unofficial title “annexe to Buckingham palace.”

To celebrate the Jubilee, the Goring’s Michelin-starred restaurant is reviving coronation dishes from 1953. These meals include filet of Dover sole, buttered Jersey Royal potatoes, and strawberry parfait. Look out for the special crown symbol on the menu.

Where to stay this Platinum Jubilee

With so much to do and see, you’ll need a place to kick back and unwind. Check out these royally-favoured establishments.

This luxury Mayfair hotel has hosted many royal shindigs, including Queen Elizabeth’s 60th birthday party. To celebrate the Jubilee, the hotel will revive “The Windsor Rose” – a special cocktail served in 1953 to honour the newly crowned young monarch.

A double room will set you back roughly £1500 (€1760) for three nights over the bank holiday weekend.

For the most dedicated – and wealthiest – monarchists, the Corinthia is the place to be. Starting at a modest £30,000 (€35,000), the Royal Fanfare package includes a chauffeur service with a Rolls-Royce phantom, an overnight stay in the 13-room Royal Penthouse, and a personal butler.

This snazzy hotel sits on the former site of Princess Elizabeth’s childhood home. The original building was destroyed during the Blitz, but you can still relive the days before young Princess Elizabeth knew she would be Queen.

A Royal Suite will cost you an eye-watering £15,000 (€17,500) per night. Drown your sorrows at the price-tag with the specially curated collection of Jubilee cocktails.

A smart hotel in the beating heart of Covent garden. The ‘Fit For A Queen’ package includes tickets to Westminster Abbey, where Princess Elizabeth was crowned, and cocktails from The Queen’s menu.

The queen is a well-known corgi-lover. If you can’t be without your four-legged friends this Jubilee weekend, then Sloane Place is the hotel for you as dogs are welcome for an extra £30 (€35) per night.

This luxurious hotel in the heart of Chelsea has a long history of royal patronage. It’s linked to the Sloane Club, a private members' establishment founded in 1922 by Princess Helena, Queen Victoria’s daughter.

Calling all royal namesakes - anyone called “Elizabeth” can enjoy a complimentary afternoon tea (worth £49 (€57.50) at the Marriott County hall if they eat it with at least one other paying guest.

If these prices make you feel like lying down, you’re in luck. Zedwell is the UK’s first sleep-centric hotel, and promises visitors a deep, anxiety-free slumber.

Soundless, windowless and air-purified cocoons in the chain’s flagship Picadilly Circus location start at £89 (€104.49) per night for a double, so you can sleep without fear of noise - or bankruptcy.