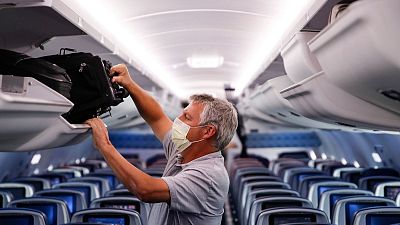 The EASA is no longer recommending the use of medical masks at airports and on planes.   -   Copyright  AP Photo/John Minchillo
By Lottie Limb  •  Updated: 19/05/2022

Face masks are no longer needed on planes according to the European Union, after the official guidance changed on Monday (16 May).

But while maskless flights are the new default, around half of EU countries are keeping them in place for the time being.

The move, which was welcomed by other travel sector bodies, was described by EASA’s executive director Patrick Ky as “a big step forward in the normalisation of air travel" for passengers and crews.

Before you throw away your mask, here are the rules to know.

Which countries still require masks on aeroplanes in the EU?

Greece, France and Czech Republic are no longer on this list. And it’s likely that more countries will follow suit as Covid travel restrictions continue to ease.

In the meantime, people on domestic or international flights between these countries should still wear a mask.

In its joint statement with the European Centre for Disease Prevention and Control (ECDC) on 11 May, EASA made clear that national regulations override the EU-wide change.

“Wearing face masks at airports and inflight should be aligned with national measures on wearing masks in public transport and transport hubs,” they said, including on flights away from one of these 12 countries.

Italy has confirmed that its mask mandate will remain in place until at least 15 June. It stipulates that more protective FF2 masks must be worn on planes and other forms of public transport rather than fabric or homemade ones.

Should you wear a mask on planes anyway?

The rule change came with a note of caution from the ECDC, which acknowledged that masks are still one of the best methods for reducing Covid transmission.

Director Andrea Ammon said that aircraft operators should continue to “encourage” passengers and crew to wear masks during the flight and around the airport. So even in countries like Denmark and the UK where masks are not mandatory, don’t be surprised to hear a pre-flight announcement to this effect.

“Passengers should however behave responsibly and respect the choices of others around them,” said EASA’s Patrick Ky.

"And a passenger who is coughing and sneezing should strongly consider wearing a face mask, for the reassurance of those seated nearby.”

Vulnerable passengers should continue to wear a face mask regardless of the rules, the joint statement added.

What do Ryanair, easyJet and Jet2 say about masks?

Airlines have welcomed the EU’s relaxation on face masks, and taken it as an endorsement to loosen their own rules.

Ryanair has also made masks optional on all flights except those to/from countries that are still enforcing them.

“We expect these states to relax their face mask rules over the coming days in line with these new health guidelines from EASA and the ECDC,” CEO Eddie Wilson added.

British Airways and easyJet had already relaxed their rules in late March, making masks optional except where either the country of departure or destination demands them. And Jet2 was the first to do so as early as 1 March, but deemed scarves and snoods a “no-no” for countries still requiring in-flight masks.