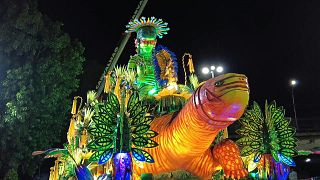 As such a symbol of Brazilian spirit, ‘carnaval’ was sorely missed in a country that has been especially hard hit by the pandemic.

So locals and visitors alike couldn’t wait to welcome the floats, many of which will have been months in the making.

"There's a lot of history. It was very emotional not to parade and now seeing everybody alive, healthy. It's very emotional to parade again," says Kecelly Hani, a 31-year-old drummer who has been performing at carnival with her samba group since she was 10 years old.

Kecelly was part of one of 12 samba groups that took part in the ‘special group’ parade inside Rio de Janeiro's iconic Sambadrome, the most expensive and extravagant of all ‘carnaval’’s parades.

Though the stadium hasn’t hosted a carnival since 2020, it was put to good use at the height of the pandemic as a vaccination centre and shelter for 400 homeless people.

The event usually takes place in February or March around Shrove Tuesday and the start of lent, however this year after a short delay around fears of the omicron variant, carnival was finally back in the cities in April.

Colourful floats and flamboyant dancers delighted tens of thousands of spectators inside the Sambadrome, however this year the enormous street carnivals that follow were still not permitted.

Though Rio’s carnival is one of the biggest cultural events on the planet and a travel-must visit, there’s a lot more to the parade than just a performance competition.

Each float tells a story or is used to highlight social or political issues.

Brazil still suffers from racism. Nothing has changed. Slums, hunger, poverty... they have a colour here: black

In the face of their upcoming elections, of the 12 schools competing in Rio, eight chose themes dealing with racial injustice or Afro-Brazilian culture and history.

"Brazil still suffers from racism. Nothing has changed. Slums, hunger, poverty... they have a colour here: black," says Aristoteles Silva, parading as a warrior for samba school Salgueiro, whose theme song was an anti-racist anthem entitled "Resistance.”

Meanwhile reigning champions Viradouro paid tribute to Rio's epic 1919 carnival - the first celebrated after the devastation of another pandemic, the Spanish flu.

"It's a love letter to carnival... [about] coming back from a health crisis, taking off our masks and coming out stronger than we were before," says Leslie Mercado, who took part in the parade.

Unless another pandemic happens (let’s all pray it doesn’t), carnival 2023 will be back in full force from 17th to 22nd February 2023 with the main parades on Sunday 19th and Monday 20th.

Brazil’s carnivals usually have 3 key parts - the parade, the balls held in clubs and hotels across Rio and São Paolo and the street carnival.

The street carnivals involve street bands known as ‘blocos’ performing on the move followed by hundred, thousands or even millions of revellers.

Watch the video above to see more from Carnival 2021.