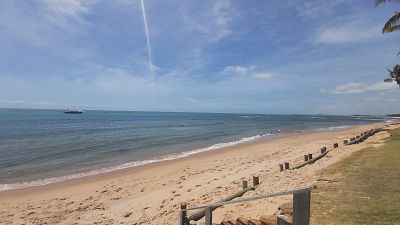 After a long flight to Salvador and a short trip up the Brazilian coast to a resort buried in the Atlantic Forest of Bahia it's too dark at first for me to get a good impression of my ultimate destination. Arriving in the dead of night, the paradisical view of an endless blue ocean and lush forest is only revealed through the large glass doors of my beachside room the next morning.

This year, to the north, 906 thousand hectares of the Amazon rainforest is estimated to have been lost to seasonal forest fires. Bahia’s beautiful Restinga, a type of coastal forest, is an equally distinct and endangered habitat where up to 60% of species are not found anywhere else in the world. Five of the world’s seven sea turtle species visit each year to breed, laying their eggs in nests on the hundred of kilometres of white sand.

I was sceptical at first, what is an eco-resort doing bringing tourists to such a precious environment? Its turns out that tourism may be the reason Praia do Forte has remained so green. In 1985, well before green tourism was all the rage, the resort was built by responsible tourism pioneer, Klaus Peters. Using natural materials and local building techniques, the palm covered rooftops of the resort blend into the canopy in a way intended to minimally impact the forest. The Timeantube river was dammed, providing water for residents and the resort but also re-greening the coastal forests and bringing back birds and capybaras. Beyond this, the resort has been involved in numerous local education projects providing work for people traditionally involved in environmentally damaging industries.

After laying in the hammock on my balcony and taking in my incredible surroundings. I head down to breakfast at Goa, the main restaurant at the resort, to try the local food on offer alongside the usual breakfast buffet. I’ve been pre-prepared by Brazilian friends but still form an immediate attachment to the pão de queijo (cheese bread).

There had been a taste of what was to come during our long layover in Lisbon where dinner at SEEN featured a menu with South American influence and a dangerously good array of cocktails. The concept for the restaurant, perched atop the nearly 90-year old Tivoli Avenida Liberdade hotel, was brought over from São Paulo to his native Portugal by chef Olivier da Costa and has been a popular haunt for Lisbon foodies since.

I have a treatment at the Anantara Spa booked after breakfast, so I head there to use the pool and attempt to counteract my desire to try everything at the breakfast buffet. I have a Thai-inspired massage infused with local Bahian ingredients like dendȇ palm oil and coconut. Outside of the treatment room, the rest of the spa is open-air with the calls of birds and the crashing of the waves providing a completely natural, relaxing soundscape.

It is abundantly clear by now that this is not a place for anyone looking for a sterile all-inclusive mass tourism destination, the local wildlife is a gloriously unavoidable feature of every experience I have. During lunch at one of the hotel’s three restaurants, tiny Marmosets, their even smaller babies clinging to their backs, are attempting to beg bread from easily won diners as we eat. “We put out a big plate of fruit for them every morning,” says director Maria Helena Santana as the waiters and waitresses fight a losing battle to keep them away, “the bread isn’t good for them.” It is the animals’ home too, she says, and they aren’t trying too hard to keep them out as they are an intrinsic experience at a resort so well integrated into its environment.

Read More | Saving the whales could help save humanity too

The resort’s particular care for its seasonal sea turtle visitors is represented in images on everything from door handles to wall art. Just a few hundred metres up the beach is the regional headquarters of Projeto TAMAR with whom the hotel has a partnership. Populations of turtles are threatened by the over-harvesting of their eggs, hunting and most importantly for the resort, holidaymakers encroaching on their nesting sites.

During my stay, I take a trip to the project with one of the hotel’s biologists to see some tiny and very cute newly hatched sea turtles. We also meet some adult turtles unable to live in the wild on their own, including two white leucistic green turtles who are ambassadors for their species. TAMAR protects nests helping increase hatchling numbers and also provides education to local people to impress the importance of saving these species so poorly impacted by historic human activity. Children from local schools attend classes at the centre several times a week to start this education from an early age. One environmental scientist giving us a tour of the base, Tomar, fell so in love with the turtles that went on the study biology after spending time at the project as a child and returned after graduating.

Light from hotels like the Tivoli Ecoresort has historically caused problems for nesting mothers and newly hatched babies as they mistake it for the reflection of the moon that guides them out to sea. After learning this I notice that it is conspicuously dark on the pathways that surround my room, a move intended to help all species impacted by light pollution but one especially beneficial to the turtles.

It’s these small but widespread environmental considerations that make it feel like I am a part of nature during my stay, not apart from it. Unadulterated experiences with the environment become a part of the luxury experience. As is the case for most environmental initiatives, Tivoli Ecoresort is not perfect but its attempts to redefine what luxury travel means are surely a big step in the right direction.

Nightly rates at Tivoli Avenida Liberdade start from £189 based on two people sharing on a B&B basis.

Nightly rates at Tivoli Ecoresort Praia do Forte start from £277 for a double room on a half-board basis.

TAP Air Portugal has a daily departure from London Heathrow, London Gatwick & Manchester to Salvador via Lisbon. Prices start at £547 return including all taxes. For further information visit flytap.com or call 0345 601 0932