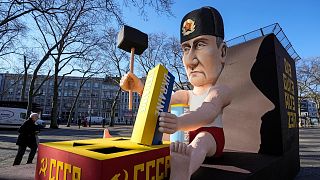 Over 250,000 anti-war campaigners took to the streets at the Cologne Carnival to show solidarity with Ukraine   -  Copyright  AP Photo
By Ben Anthony Horton  •  Updated: 01/03/2022

In western Germany, the historic city of Cologne has turned its traditional Rose Monday carnival celebration into a protest against Russia's invasion of Ukraine.

The renowned festival - which has been running since the Middle Ages - was called off this year because of the coronavirus pandemic, but organisers decided to hold a peace march in its place.

Over 250,000 people turned out to show solidarity with Ukraine, holding a minute's silence and showcasing satirical carnival floats in protest against the ongoing war.

What is the Cologne Carnival?

Every year, preparations for the event begin at 11 minutes past 11 on 11 November - with festivities officially kicking off in early February.

During the celebration street parades, balls and stage shows take over the city’s streets, while Kölsch - Cologne’s beloved local beer - flows freely in every pub, bar and club.

Children and adults adorn themselves in masquerade costumes, donning Venetian masks and a colourful selection of traditional folk clothing.

The party then hits the streets, where an array of intricately designed floats take aim at political figures, world leaders and local celebrities throughout the city.

Russian President Vladimir Putin was the main focus of this year’s mockery.

One float featured Putin as a puppet master manipulating Belarusian President Alexander Lukashenko. Another showed him playing with building blocks in order to restore the Soviet Union.

Herbert Labusga, an 83-year-old float builder from Cologne, says that his latest float is the third he has built of the Russian leader in his career.

"It’s very topical, because what is happening right now is fatal," says Labusga.

"I think it's a very important float to go through the world now. You can see how Putin plays with the nations."

Another float at the celebration depicted a peace dove impaled by a blood-spattered Russian flag - a message shared by float makers, carnival-goers and event organisers alike.

"Of course, we raise the issue of Putin's behaviour in Europe,” says Holger Kirsch, leader of the Cologne Carnival parade.

“It’s not tolerable. We denounce it with these carnival floats. And persiflage remains our instrument to point out these grievances.”

This is a sentiment echoed across Germany, where hundreds of thousands of people have participated in anti-war demonstrations since the Russian invasion of Ukraine began.

In response, German Chancellor Olaf Scholz has reversed a ban on sending weapons to Ukraine, and halted the Nord Stream 2 gas pipeline between Germany and Russia - a project that will cost the former Soviet nation dearly.

Watch the video above to see the anti-war carnival for yourself.