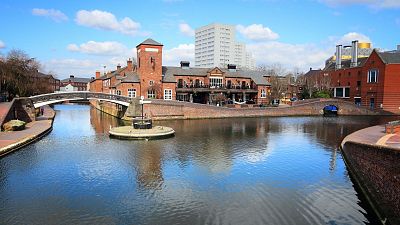 Birmingham's industrial past makes it home to the most canals and waterways in the UK   -   Copyright  Getty via Canva
By Kat Smith  •  Updated: 20/04/2022

Despite being widely referred to as the UK’s second city, Birmingham is often relegated to the butt of the joke. Peaky Blinders may have given the city’s reputation a boost, but the crowning jewel of the West Midlands is frequently defined by its industrial past - and more recently, by the fact it’s got the world’s biggest Primark.

If your knowledge of Birmingham is limited to a quick Google image search, which throws up shots of grey architecture and stretches of high-street shopping, you’d be forgiven for underestimating the city. But though it might be a fair representation of your immediate surroundings stepping out of New Street Station, it’s really not the whole picture. Anyone who has ventured beyond the Bullring will know that Birmingham is so much more.

With the 2022 Commonwealth Games being hosted in Birmingham this year - and a mere 100 days away now - there's a chance this criminally underrated city may be higher on your list to visit than ever before.

So here's our guide on where you should go when you visit.

Soak up some culture

From modern galleries to exhibitions featuring famous names, stately homes to historic mills, Birmingham’s investment in its culture is clear.

Birmingham Museum & Art Gallery, which is just as impressive on the inside as it is on the outside, is perhaps the most obvious choice for soaking up some culture. Their permanent collection features Pre-Raphaelite and Italian Baroque art, alongside modern British art and digital photography.

Their temporary exhibitions have explored important themes, such as body image, feminism, and the city’s history of revolution. Birmingham’s history can be explored further at sites like Blakesley Hall and Soho House, run by the educational charity Birmingham Museums Trust.

Also worth a visit, is the Ikon Gallery, a contemporary art venue situated in Brindleyplace. The Barber Institute of Fine Arts, on the campus of the University of Birmingham, has pieces by the likes of Monet, Manet, Rodin, Degas, Turner and Picasso.

There are also plenty of theatres - the Hippodrome is the base of the Birmingham Royal Ballet, as well as musicals like The Color Purple. SIX and Les Miserables. If you prefer to be the one dancing, rather than watching others, you can get moving at one of The Jam House’s salsa workshops on a Thursday night.

Music venues for every taste

As the home of Ozzy Osborne, Electric Light Orchestra and Peace, it’s no understatement to say that Birmingham’s music scene is varied.

For mainstream music fans, Utilita arena host bigger concerts starring the likes of Dua Lipa, Alicia Keys and Foals. The goldilocks music venues, the ornate O2 Institute, and the slightly bigger O2 Academy are also regular stops on big names’ tours, with artists like Declan McKenna, Rina Sawayama and BROCKHAMPTON due to play later this year. And for more intimate gigs, smaller music venues like The Spotted Dog, Hare & Hounds and The Crossing are usually filled with live music and DJ sets.

The classical music scene in the city is also huge, from the City of Birmingham Symphony Orchestra’s performances in the ornate Symphony Hall, to the Birmingham Conservatoire which hosts around 300 events a year.

You can find upcoming gigs and concerts at Visit Birmingham.

There’s plenty of nature if you look for it

Birmingham is repeatedly reduced to its city centre, packed full of shops and high-rise buildings. But it is far from a concrete jungle. As well as parks in the heart of the city, there are countless places to enjoy nature just a few minutes from the centre.

Cannon Hill Park in south Birmingham is the city’s biggest park, spanning 250 acres. It’s perfect for a summer picnic and pedal-boating. Another great spot is Warley Woods in the west and if you’re prepared to travel further out of the centre, Lickey Hills is a stunning country park with beautiful views of the area.

Just a short walk from the University of Birmingham’s main campus is Winterbourne House & Garden, a quiet haven full of beautiful flowers, greenhouses, and an Edwardian house. And while the word ‘bog’ is far from appealing, Moseley Bog was one of the haunts of a young JRR Tolkien – it must be pretty great to inspire the creator of Middle-Earth.

In short: there are plenty of green spaces to enjoy all over the city, so stop thinking the only colour you’ll see in Brum is grey.

The coolest place in the UK: Digbeth

Celebrated for its nurturing of creativity and culture, there’s a reason Digbeth was named the coolest place to live in the UK by The Times in 2018.

You could easily spend a weekend in just Digbeth alone. Striking street art is scattered throughout the area, the neon-paint splattered Ghetto Golf in the Custard Factory is a lot of fun, and impressive clubs like The Mill and Lab11 host huge events throughout the year. Alongside the more obvious spots, a lesser-known highlight is Minerva Works - a creative space with a vintage shop, record store, cares, music venues and art spaces.

And we can’t discuss Digbeth without mentioning the iconic Digbeth Dining Club - a weekly food and drink festival with a rotating cast of street food vendors, serving everything from cauliflower wings and curry to sweet waffles and loaded fries.

Birmingham has all the obvious – and reliably delicious - chain restaurants like Wagamama, Pizza Express and Pho. But as comforting as it is to have those options, the magic of Brum’s food scene lies in its independent venues.

From the cosy Cherry Red’s, located just outside of Birmingham New Street, to what might be the best bottomless brunch at Gas Street Social, there are countless independent restaurants and cafes to enjoy in the centre and in the suburbs alike.

Birmingham is known for its stunning Indian and Balti restaurants, but Zindiya Streatery & Bar is a particular highlight. Run by husband and wife duo Ajay & Shivani Kenth, it serves Indian street food-inspired dishes that are as tasty as they are Instagrammable, in a social and vibrant setting.

As well as a smorgasbord of cuisines, Birmingham’s independent bar scene also gives it brownie points. The Jekyll and Hyde is an award-winning cocktail/gin bar, complete with Dickensian décor, and for beer enthusiasts, the Post Office Vaults have over 400 bottled beers from all over the world.

The Independent Birmingham app can give you up to 25 per cent off of the city’s best venues, so make sure to check it out if you do visit post-pandemic.

Birmingham is a thousand cities in one, full of culture, entertainment, and nature. Hopefully, you’re now convinced that second place is actually best.