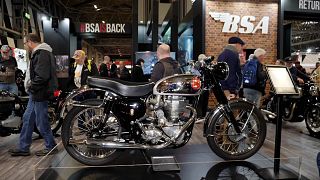 Taking place at Birmingham's NEC exhibition centre, this is the heartland of the British motorcycle industry.   -   Copyright  AP
By Kerem Congar  & AP  •  Updated: 06/12/2022

British motorcycles are making a big impression and noise as they return in force to the country's roads.

Classic brands like Norton, Triumph, Royal Enfield and BSA all had new models on show at last month's Motorcycle Live at Birmingham's NEC exhibition centre, the heartland of the British motorcycle industry.

One of the companies exhibiting was BSA (originally based in Birmingham but now headquartered in nearby Coventry).

BSA had a single message at the show: "BSA is back".

"So BSA has been off the market for 50 years now. It originated in Birmingham. Obviously, BSA stands for Birmingham Small Arms. And yeah, back in the seventies it disappeared, it went out of business," explained David Edwards, marketing manager at BSA.

The company has been reborn with the investment of Indian automotive giant Mahindra and its Classic Legends marque.

BSA is putting back on the road a single model, the Gold Star.

The original Gold Star was produced between 1938-1963 and is one of the most famous names in British motorcycling.

For a time in the 1950s it was one of the fastest production machines on the market and won many Isle of Man TT races.

BSA is so confident its modern machine is a worthy bearer of the name that it included a classic 1960s Gold Star on its stand for means of comparison.

"What we try to do is keep as much of the look and the style of the old Gold Star in the new bike. So the way the tank looks, the way the engine looks, it's not actually air cooled but we wanted it to look like the old air-cooled engine, so we designed it to look air-cooled. Things like that. So we wanted to bring the Gold Star back and keep it as close to the Gold Star of the old days as we possibly could," says Edwards.

The first stock of Gold Stars will arrive in the first quarter of 2023.

It comes in green, red, black, silver and a more expensive chrome model.

With production taking place in India, the Gold Star range will be priced between €6,500-7,000, making it an affordable entry-level bike.

Without a doubt the biggest modern success in the British bike industry has been Triumph.

It is another classic name from the heyday of British biking but underwent a dramatic reinvention in the early 1980s after the company went into receivership.

Since then, the brand has invested heavily in technology and innovation and built a wide-ranging stable of products from heritage machines, adventure bikes and has even boasted track success with cutting-edge sports bikes.

In 2022 the company, based in Hinckley in the Midlands, is close to producing 100,000 motorcycles a year.

The large majority of these bikes are sold overseas where the appetite for a British brand is high.

Triumph used the show to present its latest range of dazzling chrome motorcycles.

"British brands dominated the motorcycle world in the fifties, the sixties, and then some of them lost their way. And it's great to see a resurgence in that, particularly here in the Midlands at the end of the day, which has been at the heart of it for so long," says Devron Bolton, general manager of Triumph UK.

Triumph's largest market by far is the USA, where the appetite for its Britishness remains high.

"British brands are in vogue across the globe these days, we're quite unique, there's not lots of us. And it certainly does seem to resonate. America is our biggest sales market by volume, although it's a massive motorcycle market so that's not a huge surprise. But very much that cool Britishness I think is definitely something that is in vogue at the moment," says Bolton.

Another British brand celebrating its 2023 range of machines is CCM, a Bolton-based bike maker which bears the Union Jack proudly on its logo.

These minimalist flat-tracker bikes are all hand-built in the UK, where the factory can produce around 20 bikes a week.

"One of the key things that people love about our brand is right there, it's the Britishness. And we get people screaming over social media from North America and Europe saying bring your bikes over here, we want them now," says John Drogan, marketing manager of CCM Motorcycles.

Unlike purchasing your next car - where buyers are more likely to research fuel-economy and service intervals - Drogan believes buying a motorcycle is much more of a gut-instinct.

Is Birmingham the UK's most underrated city?