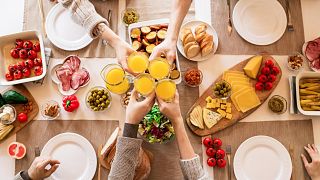 Breakfast is the most important meal of the day, so the saying goes, and getting it right can make your morning. Whether you like your eggs scrambled, fried, poached or vegan, most of us have strong views about what constitutes a good morning meal.

Hotel breakfasts can be really hit and miss, ranging from fruit and cereal buffets to enormous fry-ups and everything in between. If you’re planning a hard day’s sightseeing, a hearty plate of food can see you through until the afternoon, so picking the right hotel is essential.

UK guide Mornings.co.uk has rounded up the best hotel breakfasts in the world, according to Tripadvisor reviews. They’ve looked at 113 countries and counted the mentions of key phrases from satisfied eaters, including: ‘best breakfast’, ‘great breakfast’, and ‘excellent breakfast’.

They then mapped the most popular ones they found, generally for 3,000 or more positive mentions, breaking their findings down by continent.

So where can you find the best hotel breakfast in the world?

Due to its fondness for the fry-up, three London hotels make it into the global top ten. The Tower Hotel, a four-star establishment near Tower Bridge makes it to number eight, while the Premier Inn London County Hall Hotel in Waterloo comes in at number six.

The English capital takes the number one spot too, with a fantastic choice of breakfasts at the Park Plaza Westminster Bridge on the city’s South Bank receiving a glowing 5,363 positive reviews.

It’s not all about London though. Rome’s chic four-star Hotel Artemide makes it to number two, while Malaysia’s Traders Hotel is at three, with another Malaysian hotel, the Shangri-La Kuala Lumpur at number 10.

Thailand also features twice, with the Chatrium Hotel Riverside at number four and the Shangri-La Bangkok at five. The Hotel Palazzo Zichy in Hungary takes number seven, while Sandals Royal Bahamian in the Bahamas is at nine.

London isn’t exactly the culinary capital of the world.so many tourists passing through the city each year, its hotels have to keep standards high. The Park Plaza has 20 floors, so could technically be serving up breakfast to 1,019 rooms every morning. That’s a lot of people who could rate its cooked tomatoes.

The Park Plaza has 20 floors, so could technically be serving up breakfast to 1,019 rooms every morning.

Funnily enough, the hotel was built on the site of 1 Westminster Bridge Road, previously voted one of the ugliest buildings in the UK. The original building was demolished in 2006, making way for the sleek Park Plaza and its tasty breakfasts.

What about breakfasts in Europe?

There are plenty of choices to pick from on the continent, with big names like the Radisson Blu and Hilton featuring a few times. There are some hidden gems to be found too, including Sarajevo’s Hotel Halvat, a three-star, family run guesthouse.

One tripadvisor reviewer commented “breakfast at the guesthouse is very extensive, and you can tell the host what kind of breakfast you would like to eat. From fried eggs to pancakes and roasted vegetables and fresh fruits, everything is possible.”

If you’re travelling further afield, the website also recommends the best hotel breakfasts in each US state too.