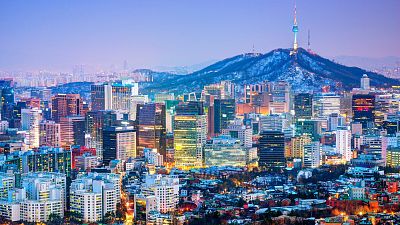 Known for its technology, traditional palaces, and K-Pop scene, Seoul is the beating heart of South Korea. With a population of 9.7 million - making the city twice as dense as New York - Seoul is a modern metropole with tradition at its heart.

Packed with historic restaurants and looming skyscrapers, it’s a busy city that likes to stay up well into the night. There are plenty of places to escape the crowds though, including the top of the city’s own mountain and best viewing point, Inwangsan.

The humid subtropical climate means Seoul is a pleasant city to visit during spring, summer and autumn, with temperatures dipping to freezing in winter. There are lots of leafy parks to cool off in during the warmer months too, including Naksan Park, one of the best places to see cherry blossoms in spring.

With so much to see and do, here’s everything you need to know when planning your trip.

Travellers from Europe and the UK will need to apply for a South Korea Electronic Travel Authorisation (ETA), which allows tourists to travel without a visa. A relatively simple online form, it must be completed at least 24 hours before travel. You can find the ETA here.

You’ll be able to see if your country is eligible for the ETA scheme here. Tourists from unauthorised countries may need to apply for a visa.

What are the travel restrictions for South Korea?

Tourists who have been fully vaccinated can apply for a ‘quarantine exemption’ from their country’s South Korean Embassy, which means they won’t have to quarantine upon arrival in Seoul. Passengers without this, or those who are not fully vaccinated will be required to quarantine in a government designated facility for 14 days.

Tourists will also need a negative PCR test, taken in the last 72 hours, in order to enter Seoul. Passengers will then be temperature checked and asked to take another mandatory PCR test upon arrival.

What are the restrictions in Seoul?

Seoul is currently under level four social distancing restrictions, meaning masks are compulsory in public places and on public transport. Failure to wear a mask can result in a fine of up to 100,000 Korean Won (€73).

South Korea hopes to be restriction-free by February 2022.

The best way to understand any culture is through its food, and this is no different in Seoul. While the country may be best known for kimchi and bibimbap bowls, there are hundreds of traditional and modern dishes to try.

If you want to eat like Korea’s royal family do, then head to Seokparang.

If you want to eat like Korea’s royal family do, then head to Seokparang. Sitting on Buam-dong, a green and leafy hill in the north of the city, the restaurant is housed in a traditional hanok building, surrounded by a stunning walled garden which regularly hosts weddings. Seokparang’s menu focuses on dishes traditionally cooked for the royal court.

In fact the recipes themselves have been handed down through the city’s palace kitchens and historic aristocratic families. Dishes include eomandu (fish dumplings), songitang (pine mushroom stew) and jeonyuhwa (seasonal flower pancakes).

If you’re looking for traditional food with a modern twist, then Onjium, which opened its doors in 2018, might be the place for you. Awarded a Michelin star in 2019 and again in 2020, the restaurant overlooks Gyeongbokgung Palace and is half restaurant, half research institute.

It’s no secret that South Korea has a strong drinking culture too, so once restrictions ease, there are lots of bars to choose from in Seoul. There’s been a big speakeasy resurgence in recent years, with US prohibition style bars popping up all over the place.

One of the finest examples of this is Le Chamber. The instagrammable entrance sees visitors having to pull the correct book from a shelf to gain entry. Once inside, there’s over 200 whiskies on offer, alongside traditionally fermented spirits and sophisticated cocktails. But prices are around $25 (€21) per cocktail, so it might be one to save up for.

Explore the city by river

If you want to escape the crowds in Seoul, one of the best options is to hop on board a boat. The city is cut in two by the Han River, which divides the modern financial centre of the south from the more historical north.

Many companies run river cruises throughout the day and night, with moonlight cruises particularly popular. If you’re after something a little more luxurious though, Golden Blue Marina rents out yachts for up to eight people, and will provide you with a three-hour guided tour, while you sit back, relax and admire the views with a glass of champagne.

Tours take in some of Seoul’s best architecture, including the famous moonlight rainbow fountain display, which illuminates the river in spring and summer.

Take in the view from Inwangsan mountain

Another place to escape to when the busy pace of the capital gets too much is Inwangsan mountain. Overlooking the sprawling capital below, this verdant mountain stretches 338m into the sky, allowing visitors to ramble along the trail through trees and alongside rivers. The peak provides some spectacular views of the city, and it doesn’t take long to climb either, with the ascent and descent only taking two hours in total.

Though it might take longer if you want to linger and enjoy those cityscape views.

From the top you’ll be able to see Gyeongbokgung Palace, the Han River and the Lotte World Tower, Korea’s tallest building.

From the top you’ll be able to see Gyeongbokgung Palace, the Han River and the Lotte World Tower, Korea’s tallest building. As you hike the trail, you’ll also be able to see some intricate granite rock formations. Hiking is permitted at night and the Seoul City Wall trail is illuminated to guide hikers safely along.

If you’re a fan of popular music, then it’s likely you’ve heard of K-Pop. The music genre has been booming over the past few years, with a growing fanbase in Europe too, due to incredibly loyal and politically vocal stans (fans).

K-pop fans should head to K-Star Road to see a collection of Gangnam dolls, each celebrating different K-Pop icons from Psy to Girls’ Generation.

BTS fans can also take themselves on a city-wide tour of sites the band are associated with, from the BigHit Entertainment building to Hakdong Park, where the band used to hang out before they were famous.

Shopping and self-care in Seoul

If relaxation and self-care are more your thing, there are plenty of spots to pamper yourself in this city. Seoul has a growing reputation for organic skincare products, inspired by South Korea’s traditional apothecaries.

If you’re looking for some new lotions and potions, make sure to head to Eath Library near Gyeongbokgung Palace. Using carefully sourced botanicals, the boutique draws on the rich history of Korean medicine dating back to 3,000 BC, which it combines with the latest skincare technology.

According to Choi Kyeng Ju, Director General of the Seoul Metropolitan Government’s Sports and Tourism Bureau, the pandemic has changed people’s perception of luxury tourism with greater attention to privacy, cleanliness and more personalised experiences.

By producing premium content that is unique to Seoul and emphasising personal health and safety for travellers, officials aim to position South Korea’s capital city as a leading global luxury tourism destination.

The government’s emphasis on luxury tourism can be seen in action at the top of South Korea’s tallest skyscraper - the Lotte World Tower - the fifth tallest building in the world.

Located on the 118th floor, Seoul Sky is an observatory which gives you 360 degree views of the city below, and features a glass floor for those who don’t mind heights. If yoga is your favourite way to unwind after a hard day’s sightseeing, you can even do that here too.

While those feeling especially brave can book a ticket for the Sky Bridge and head outside for a walk above the city at a mind-boggling height of 541 metres.