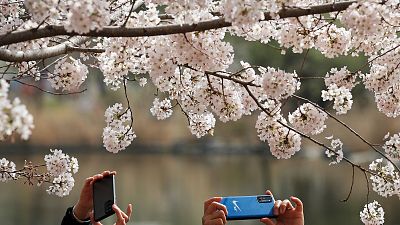 Spring is finally here in the Northern Hemisphere: which means the beautiful cherry blossom has appeared too!

From Japan to the Netherlands, from China to the US - everyone's favourite springtime sight is here, and it's spectacular as ever.

In Kyoto, Japan - a city famous for its cherry blossom - the bloom has had its earliest peak since 812. It's believed that our warming climate is why blossom is blooming so early this year around the world.

While the cause of the early appearance of cherry blossom isn't the most uplifting thing, looking at photos of this year's bloom is still a wonderful way to spend some time while we can't always see them in person.

But Japan isn't the only country in Asia with an extraordinary bloom of cherry blossom.

Where else have you spotted cherry blossom this spring? Let us know on Twitter by tagging @euronewstravel.

A guide to the colourful shopfronts of Europe