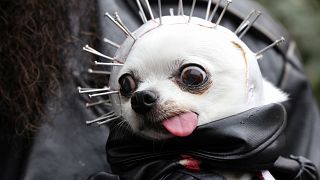 After the parade was cancelled in 2020 due to the COVID pandemic, this year’s event attracted hundreds of spectators wanting to catch a glimpse of the best-dressed pooches in the Big Apple.

Here are some of this year’s best and most paw-culiar costumes:

This quirky tradition started over 30 years ago as a fundraiser for a dog run, which organisers wanted to include in park renovations in the city’s Lower East Side.

Tompkins Square Park was not always the family (and dog) friendly place that it is today. In the 1980s, the park was synonymous with illegal drug activity and a sad reminder of the city’s increasing social problems as the park was home to a large, makeshift encampment for homeless New Yorkers.

When the city planned a large scale renovation of the park, local dog-owners volunteered and joined forces to raise money for the Tompkins Square Dog Run. Unsurprisingly, their most successful fundraising event was a Halloween Dog Parade.

Dog costumes this year drew inspiration from many aspects of pop culture - from a broadway pup dressed as the Phantom of the Opera, to dogs dressed as the guards from the hit Netflix series, the Tiger King.

Have these photos inspired you to dress up your dog for Halloween this year?