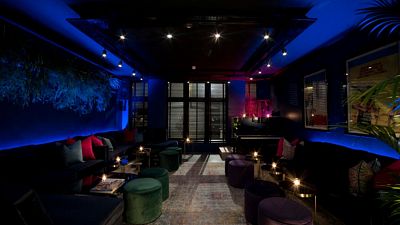 The Hux Hotel's late night cocktail bar is the perfect spot to wind down after an evening in London   -   Copyright  The Hux Hotel
By Sarah Palmer  •  Updated: 20/10/2021

The exclusivity of the Hux Hotel in London’s Kensington is immediately apparent as soon as I approach the front door.

A man dressed in a suit and tie greets me when I arrive and introduces himself with a name he shared with a well-known Roman Emperor - a fact I would confirm later that night after several cocktails, by insisting I see his ID.

“Is this the Hux? Are you the bouncer?” I ask tentatively. Google Maps has let me down one too many times before in this city, and the unassuming entrance is somewhat concealed among the grand, overbearing buildings of Kensington’s main road.

“The concierge,” he corrects me with a big smile as he opened the door.

As I step inside, the bustling high street quietens. I am led up a dimly lit staircase, adorned by eclectic artwork, antique artefacts and several animal busts.

“Welcome to the Hux.”

A sultry vibe inside

A couple of flights up, I find the entrance foyer-come-cocktail lounge - open ‘til the early hours and offering a vast drinks menu and live music.

One of the first things I notice is that the check-in desk innovatively moonlights as a bar. There is, after all, a shortage of space in London.

The Hux bar team are an attentive bunch, swiftly ensuring you barely have to stand back up once you’ve settled into one of the plush seating areas. Admittedly, this could be an insurance policy - the decor inside is dark and somewhat cluttered in a cosy way. So realistically it's a bit of a nightmare to navigate after a few negronis.

A sultry, live Portuguese guitar band entertains me throughout the evening, down in the bar. Hidden away from the busy road outside, the vibe is exclusive and sexy.

It soon becomes clear that showing up single is a faux pas on my part (though my inbox is always open, gents). The bar is largely occupied by well-dressed couples and the odd group reclining on the sprawling sofas. But the presence of the band definitely makes me look a little less out of place.

As far as Kensington’s elite are concerned, I am just another groupie.

Ending up in a Korean restaurant

My own night takes a bit of a turn when a few drinks later I venture out in the pursuit of food and, navigated by the Roman Emperor, find myself at the Korean takeout a few doors down. One or two shots later and we are blasting Einaudi on the piano and eating fried chicken until the matriarch of the establishment politely asks us to leave (it’s nearly 3am).

Tasty Korea - the dumplings really took the edge off my hangover the next day.

The verdict? Despite my unconventional end to the evening, the drinks are well-stirred and the energy is chilled. The Hux is a great place to wind down at the end of a night.

Where is the Hux Hotel?

The Hux is in a prime location on Kensington High Street, west London. It’s right opposite Hyde Park - ideal if you need to walk off the cocktails the next morning.

Is it suitable for families?

I saw a couple of families in and out of the Hux, but it definitely has more couples, friends, swingers or solo explorer vibes.

What else is there to do in the area?

You’re a stone’s throw from main attractions like the Royal Albert Hall, the Natural History Museum and the Science Museum.

How do you get there?

The nearest tube station is High Street Kensington and there’s a bus stop right outside. You’re in a great spot for ordering an Uber or flagging down a black cab too.

Inside the first hotel in the Europe to take cryptocurrency payments