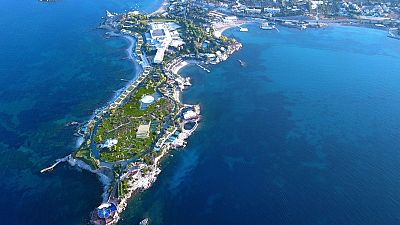 With hundreds of islands, ancient cities and a varied landscapes where heroes fought and gods and goddesses frolicked, Greece is well and truly the land where drama was born.

There's no shortage of dramatic places to stay, either. Whether it's a boutique hotel in Athens with a view of the Acropolis or a cliffside villa in Santorini.

But how about some real drama—a vintage seaside windmill or wine factory, anyone? These Greek hotels are certainly not the biggest, but they are very big on drama.

The view from the cliffs of Santorini over the famous volcanic caldera has been over-Instagrammed to the point of cliché—so if you really want some drama, how about a view of Santorini itself?

That's exactly what you'll get from the Perivolas Hideaway, a luxurious bolthole with minimalist aesthetics located on the site of a former pumice mine perched on the edge of Therasia island.

This is just opposite the settlement of Oia on Santorini, but unlike Oia, the place is never crowded, which is probably why the likes of Brad Pitt and Angelina Jolie are rumoured to have stayed here.

The lights of Santorini sparkle at night like a volcanic necklace across the dark caldera.

Exploring Greece's slender, southern Mani peninsula is like a trip back in time—it's famous for its stark landscapes and dramatic, mainly early 19th Century defensive stone towers. At Tainaron Blue you can actually stay inside one.

The three-storey structure has actually been given a modern makeover: think luxurious beds and exposed stone walls paired with sleek bathroom fixtures and eco-friendly toiletries.

There are artworks by Greek sculptor Nikos Karalis and best of all, ravishing views of either the mountains or Mediterranean Sea.

Many hotels built in recent years could be seen as efforts by fancy architects to marry traditional architecture with a modern touch. But at Aspros Potamos, no such nuptials were necessary. An authentic, 300-year-old settlement in the rugged, uncommercialised Pefki area of southeast Crete, it's the real McCoy.

The lodgings are comprised of 10 stone houses with thick outer walls clustered together and connected by a network of original narrow stone pathways.

Decor is earthy and traditional, and while hot water for your shower is provided by solar power, there are no electric sockets in the guest quarters: you'll be reading your book or chatting to your travel partner by the light of candles and oil lamps.

The island of Rhodes has long been something of a poster child for mass tourism, but that doesn't mean you can't find smaller boutique-style places to stay—one dramatic case and point, the Mythica Tower Mill.

Located west of Rhodes town just opposite Ialysos Beach, it's a sturdy, renovated windmill built in the 15th Century with luxuriously and eclectically decorated interiors. From the top floor, the sound of the waves across the sand will serenade you to sleep.

What happens when you mix wine with cutting edge building conversion? A double dose of drama, particularly if we're talking about the Dexamenes Seaside Hotel—and we are, because it's one of the coolest places to bed down in Greece.

Located on an unspoiled stretch of coastline in the western Peloponnese region, Dexamenes is what happens when you let some gifted architects (in this case, from the K-Studio) loose on an abandoned wine factory: a collection of 34 sleek, minimalist-chic "WineTank" suites, just footsteps from an enticingly uncrowded beach.

There's a trilogy of beachy eateries on the premises too, but the ambience is understated: come here to enjoy a singular design experience spearheaded by owner Nikos Karaflos, from April to October.

The northern Greek city of Kavala, located on the Thracian Sea, is called "the blue city" on account of the crystal clear waters of its coasts and expansive sea views.

Founded in the 7th Century BC, Kavala breathes history, and is home to Imaret, one of the most historic hotels in Greece.

With its many graceful domed porticos giving it dramatic panache, the Imaret Hotel was built as the Pasha Mehmet Ali's seminary for students of Islamic theology back in 1817—five years before the Greek Revolution.

Its sea of chimneys and rows of arches are a visual throwback to another time, and today it is really a living monument, because its lavish rooms and sumptuous gardens of 3,000 square meters, redolent of orange blossoms, form the basis of a modern luxury hotel that is truly unique in Greece. Extra!

In Greece there is so much to discover. It always seems there is one more museum up the road or one more island over the horizon. And so it is with this small list, because there is a quite dramatic hotel by the sea, right at the doorstep of the capital: the Grand Resort Lagonissi Athens.

It's not a new hotel, but it's where the cast of Mamma Mia! is said to have thrown their wrap party, and its location on a private peninsula chiselled with small private beaches and framed by the rugged Attica hills makes it a candidate for most dramatic hotel in the Athens Riviera. In season, if you don't have time for a run to Mykonos but still crave a serving of that cosmopolitan Greek island flavour, Lagonissi's your place.

Greece removes quarantine for EU, UK, US and other travellers