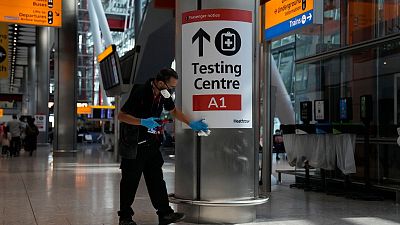 Travel restrictions are a hot topic at the moment with pretty much every country in the world introducing measures to curb COVID infections from foreign travel.

Although the restrictions can often be confusing and are subject to change, one common feature is requiring a negative test or proof of vaccination for entry at the border.

But these tests can often be expensive, costing as much as £175 (€205), and there are concerns that passengers are committing test fraud.

In November last year seven people were arrested at Charles de Gaulle airport, France, for having 200 fake COVID test certificates on their phones.

In a similar incident at Luton airport in the UK, a man was arrested on suspicion of selling fake COVID test certificates in February of this year.

In November last year seven people were arrested for having 200 fake COVID test certificates on their phones.

Meanwhile a British immigration official told a parliamentary committee that as many as 100 artificial COVID documents were being used to get into the country, and that’s just the ones that were easy to spot.

The maximum penalty for fraud by false representation in the UK is a 10-year jail sentence.

This year, international security agency Europol has warned of the dangers and easy access to fake COVID certificates.

How concerned should we be about travellers sticking to COVID restrictions?

There have been reports that in Zanzibar negative lateral flow tests are sold en-route to the airport and that tests are being inadequately conducted on tourists in Egypt, guaranteeing a negative result.

Sean* had to book a pre-departure test to return from his holiday in Crete to the UK.

“They did the COVID test, we went outside and had our test taken. It was a rapid antigen lateral flow test,” he says.

“It wasn't very sterile, they didn’t use gloves.

“The pharmacist didn’t put three swabs in the nose properly. It was kind of a nominal amount. Within about two minutes the pharmacist confirmed that I had a negative result.”

A pre-departure COVID-19 test is required when entering the UK from any country.

“The lateral flow test was what we’d have in the UK,” continues Sean.

Immigration officials in the UK have said they mostly rely on trust that people are following the rules, and even say that if COVID certificates are in foreign languages they can’t tell if they’re fake or not.

“The attitude amongst many holiday-makers was that whether they are negative or not they want to go back to the UK when they planned to do so,” he says.

“It seemed like the transaction was for a certificate to fly.”

When Sean arrived in Heathrow, no one checked the documents for his pre-departure COVID test. “When I went to Greece we had to show proof of our vaccination,” he adds.

A UK government spokesperson says, "The NHS COVID Pass includes rigorous security features to minimise the risk of fraud and help organisations authenticate the COVID Pass presented to them.

Travel restrictions are subject to change and you can keep up with updates here.

*Sean’s name has been changed to protect his anonymity.

Learning how to kitesurf in Africa's windiest city

Why has this braille railing in Naples gone viral?

Sport climbing: The best holidays in Europe for beginners