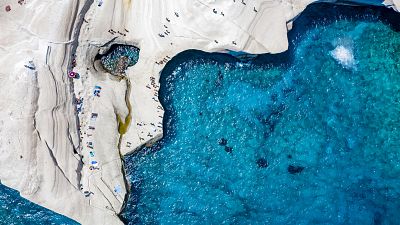 From islands shaped like butterflies and seahorses to soaring citadels almost lost in the sea of time, Greece is home to hundreds of small islands often close to more famous ones and just as spectacular-- sometimes even more so. Here are just a few of our off-the-grid Greek island favourites.

This small pine-clad island is almost hidden in plain sight, right in the middle of the Saronic Gulf overshadowed by larger Aegina, but still less than an hour by ferry from the busy port of Piraeus. Though fairly well-known among Athenians, most tourists literally blink and miss Agistri (whose name means "fishing hook") as their ferries cruise by on the way to more famous spots. But the island is a microcosm of Greek beauty and nature, with only a few settled areas such as Megalochori and Skala and some spectacular but easily accessible sandy beaches like Chalikiada on the eastern side facing Aegina.

If you're looking for a Greek island that basks in obscurity, Astypalaia, which the Greeks also call Astropalia, is it. It's the westernmost island of the Dodecanese archipelago, of which the largest island is Rhodes and the one closest to the Cycladic islands. Seen from an airplane window Astypalaia resembles a butterfly, the two distinct sections of the island joined by a narrow stretch of land. Chora, the island's small capital, is a maze of cubic two-storey white houses stacked up amphitheatrically at the foot of an imposing medieval Kastro castle fortress. Along the rocky Vathy peninsula, archaeologists found phalluses and a cheeky amorous declaration chiseled into the limestone around the fifth or sixth century BC, conferring upon Asypalaia the title of home of the world's oldest known homoerotic graffiti.

The Byzantine castle island of Monemvasia emerges from the Peloponnese coast a few hours drive south of Athens. There is only one entrance to the medieval fortress, which clings somewhat precariously to a tiny but dramatic island connected to the mainland by a short manmade causeway (prior to 1971 there was no link at all). The fortress began to take shape around 583 when locals needed to defend themselves against Saracen raids. The lower town is a tangle of ancient houses, narrow cobbled streets, and tiny chapels, now interspersed with lively shops and cafes. A path leads to the upper town with castle ruins, the lonely Agia Sofia church, and ravishing sea views. If you stay at Kinsterna, a lovingly restored Byzantine mansion and estate in nearby Agios Stephanos, you'll be treated to views of Monemvasia just a little way offshore.

The horseshoe-shaped Milos (where the Venus de Milo is from) is volcanic by origin and boasts beaches with backdrops of multicolored cliffs and water that dazzles with crystalline greens and blues. Its geological formations are the result of undersea eruptions that started perhaps up to three million years ago, piling up layers of lava that reacted to the island's geothermal waters and created a kaleidoscope of rock formations and lofty sea stacks. Sarakiniko is a windswept, alabaster-white seaside moonscape mix of limestone and diatomite, a soft white sedimentary rock that was formed from volcanic ash. In antiquity the trade in obsidian was brisk; you can still see the ruins of a Minoan trading post where the volcanic glass was traded can be found at Filakopi. The even more off-grid island "sister" island of Kimolos to the northeast is growing in popularity, with pristine sandy beaches and Mycenaean rock-cut tombs adding to its allure.

According to myth Artemis, the goddess of hunting found an island submerged under the waves and asked Selene, goddess of the moon, to illuminate it and hoist above the surface: Patmos was born. Perhaps coincidentally Patmos is shaped like a seahorse, the snout terminating in fine beaches while midway at Skala local tavernas like Trehantiri beckon with fresh-caught fish and hand-cut French fries. Quieter Chora is the island capital crowned with the fortress Monastery of St. John the Theologian. With none of the touristic overdrive of larger Rhodes to the south, Patmos is where John the Apostle penned the Book of Revelation, the final book of the New Testament, in the Cave of the Apocalypse (which is prettier than it sounds). A pristine volcanic landscape with rugged peaks and lush green valleys is wrapped in a 63 kilometer-long ribbon of beaches, bays, and hidden coves.

Not all roads lead to Nisyros, which is probably how the islanders like it. But if you're willing to take a 13-hour ferry from Piraeus—the shortcut is a flight to Kos and then a much shorter boat ride—you are in for a genuine Greek island treat The 14th-century monastery of Panayia Spiliani looms over the charming harbor town of Mandraki, while in the interior mountain villages such as Nikeia and Eborio seem to hide out from the three volcanic craters. Steam and sulphur regularly emanate from the ksephysitres (vents) but don't worry: the last eruption was back in 1888, and one of the better by-products of past volcanic activity is stunning black sand beaches like Xoxlakoi.

In the old days of slower and less frequent ferries, Syros was for many travelers to Greece just the place where the boat stopped before sailing on to nearby Mykonos. But that reputation as a transit point belies the island's significance in Greek history. When the Greek Revolution broke out in 1821, and which will be widely commemorated in 2021, Syros absorbed Greek refugees from some Aegean islands that were still under Ottoman occupation. The new arrivals greatly enriched the main port of Ermoupoli, which took on the air of a small city of Western Europe. Marked by fanciful Italianate architecture in the Vaporia neighborhood it boasts plenty of spots to take a dip in the blue-green water. Ermoupoli is also emerging as a Cycladic dining destination, with breezy spots like Avant Garden and Chef Alex Karakatsanis's "food and culture" restaurant San Michali winning wide praise.