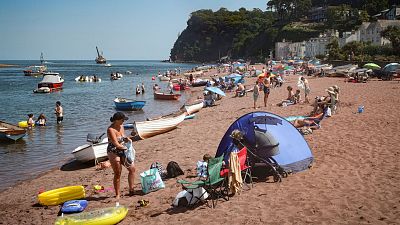 More Brits are retreating to nearby beaches this summer, such as the Teign estuary in Shaldon, Devon, England   -   Copyright  AP Photo/Tony Hicks
By Shannon McDonagh  •  Updated: 13/08/2021

Complicated international travel restrictions have left many British people looking closer to home for their first summer break in over 18 months.

But at what cost? An influx of new domestic holidaymakers has seen the price of basic accommodation and travel soar by as much as 40 per cent this year.

Holidays to popular travel destinations in Europe have been out of the question for many after the UK revealed itself to be the most expensive place in Europe for PCR tests.

The situation isn’t helped by the country’s exclusion from the European Digital Covid Certificate (EUDCC), either.

Forms, tests, and traffic light systems have made the process of booking a holiday abroad stressful enough that tens of thousands of extra tourists would much rather head to their nearest seaside town.

Despite this summer’s dismal weather, travel in the UK has experienced a period of strained shortages and rapidly inflated prices. Hotels and home rental sites like Airbnb are reaping the rewards of what many working families believe to be staggeringly expensive costs for a week-long stay.

This hasn’t stopped the majority of countryside retreats and city long-weekends from being fully booked, however.

We’ve spoken to some Brits about how this has affected their summer holiday plans.

Inflated prices are stopping families from having their yearly breaks

A summer break to any destination was simply out of the question for small business owner Laura and her family this year. The forms and tests required for a trip away would have been t just as expensive as a UK holiday, “with more stress involved.”

“For the last 20 years we've always found somewhere brilliant - this year even looking off-season at the end of September and beginning of October the prices are high and availability is scarce,” she says.

A converted barn she, her husband, and their two teenage children rented in Wales’ Brecon Beacons three years ago had almost doubled in price this summer. They had spent £2500 (€2,935) for a two week stay in 2018 and checked the same accommodation to find it was now asking for over £1900 (€2,232) a week.

Virgin Atlantic currently offers trips - with flights and accommodation included - to Barbados and Cuba for less than that.

“How can a family on a budget justify £4k for a cottage in Wales for two weeks?” she questions.

She isn’t the only one with this predicament.

Brits are using refunded trips abroad to foot the bill

Another frustrated holiday booker told us that, like many Brits, their first post-pandemic summer break was only viable through two cancelled, refunded international trips to Turkey and Portugal.

She took herself and her family down from Scotland to Cornwall, a drive of over 500 miles, to find the nearest place to “recreate a sunny beach experience”.

It was worthwhile, she assures us, but in future, she would “wince hard at anything over £1500 (€1,763)” between her and her partner for another week in Cornwall - not including petrol.

Organising the trip outside of the peak English school holiday season and coinciding with the Scottish holiday period instead also eased the financial blow somewhat.

Planning ahead hasn’t rewarded everyone - early booking wasn’t enough to offset the staggering costs of Amanda’s time exploring the north of England.

“That was booking last year too, so who knows what the cost would have been if we'd booked later. Spending money on top obviously meant this was higher.”

She explains that while her family would have much preferred an all-inclusive break somewhere sunny in Europe, they were able to travel to areas of the UK they wouldn’t usually visit, albeit at a greater cost.

“It still allowed us to completely switch off for a week - the main thing is that we weren't in our hometown!”

The next step for Amanda and her partner is honeymoon planning. They’ve entertained the idea of both a domestic and an international trip but want to wait to see what happens to the UK’s ever-changing traffic light travel system before they commit to a destination.

Is it better to just go abroad?

Some Brits are being incentivised to go for more extravagant trips abroad than they usually would, safe in the knowledge that they are at least getting guaranteed sun for the same price.

Sonya, a London-based entrepreneur, ended up biting the bullet and heading to Ibiza after researching accommodation in Edinburgh and Cornwall. It left her feeling deflated due to high prices and erratic July weather.

Even with the additional cost of PCR tests, the island offered her warmer temperatures and an all-inclusive stay that wouldn’t have been possible in the UK for the same price.

In an ideal world, she would have liked to have given back to other small businesses that suffered throughout the pandemic and suggests the government could have done more to make this accessible for people.

“As a small business owner and UK resident, I would have preferred to stay in the UK and support other small businesses to support the economy, but that is not possible when the venues, hotels, meals, and transport itself are so expensive.”

She says the government could have planned appropriately for this kind of influx by offering discounted domestic travel to stimulate tourism in the UK. It could follow a similar framework to last year’s hospitality Eat Out To Help Out scheme.

“The UK government assumes that people are going to holiday, but aren’t actively helping to promote the UK as a holiday destination. With many of us being working class or below average living salary - how are those with social mobility needs supposed to travel and explore if they can’t afford it?”