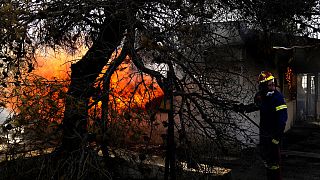 Hundreds of Greek and Polish firefighters were battling a major wildfire decimating a pine forest for a fourth day Thursday northwest of the Greek capital.

The fire near the village of Vilia, about 60 kilometers (about 40 miles) from Athens, has already burned through thousands of hectares and led to evacuation orders for several villages in the area.

The fire department said 427 firefighters, including 143 from Poland, along with 149 vehicles were battling the flames. Five water-dropping planes and five helicopters were providing air support, while the army sent personnel and machinery.

The Vilia blaze is the latest of hundreds of wildfires that have burnt across Greece this month, fuelled by a heat wave that parched shrubland and forests - the country's most severe in about three decades.