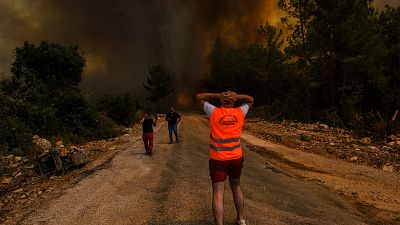 Turkey, Greece and Italy are the latest tourist destinations to feel the impacts of the climate emergency. Tourists who navigated travel restrictions are now being evacuated from popular destinations where the fires have come very close to hotels and resorts.

In Turkey, over 150 fires have hit tourist areas including Muğla and Antalya. Local and international firefighters continue to battle another seven blazes.

Where has been worst affected by the Turkey fires?

Wildfires are common in Turkey during the summer, but the blazes over the past few days have been exceptional. The heat intensity has been four times higher than ever before, according to experts.

Coastal areas popular with European tourists have been badly hit. Over the weekend, tourists and locals had to be evacuated from Bodrum and Marmaris in the south-west of the country. In one case private boats came to the rescue as flames approached the water.

How did the fires in Turkey start?

Environmentalists have been warning for decades that Mediterranean destinations would be affected by environmental disasters like this. The current heatwave has doubtless fanned the flames. However, investigators are trying to establish whether some of the fires were started deliberately, and there are reports that one suspected arsonist has been detained.

But there’s no getting away from the fact that thanks to rising global temperatures, Turkey has been experiencing a very hot, dry summer. Its 60 year temperature record was broken last week when Cizre, a town in the south east, registered 49 degrees Celsius.

After recent deadly heatwaves in the US and ongoing floods in Europe and China, the scenes of destruction in Turkey add to the growing list of extreme weather events that are caused or made worse by climate change.

Can I travel to Turkey right now?

The EU has issued its highest fire risk alert for areas of Turkey, Italy, Portugal, Spain and parts of north Africa.

Beside COVID-19 related travel restrictions, travel to and from Turkey remains unclear. Flights are currently unaffected. However, various embassies have updated their travel guidance to include information around forest fires. This outlines the illegal nature of starting fires and information about how to contact emergency services.

With so many popular resorts affected by the wildfires, those planning a holiday to the country in the near future should confirm with their holiday provider in advance while the situation continues to change so rapidly.

As of Monday 2 August, eight people have been confirmed dead and 27 are in hospital.

Temperatures have also reached 40 degrees Celsius in inland areas of Italy, Greece and Tunisia. In Greece, wildfires have forced evacuations of villages outside the western port city of Patras. Currently, there are no direct impacts on travel to any of these countries.

How can I help?

If you would like to support rescue and recovery efforts in Turkey, search crowdfunding platforms such as gofundme.com.

Most of Turkey, including main tourist areas, has thankfully been untouched by the fires. These destinations remain reliant on tourism, especially after 18 months of COVID-19 closures.