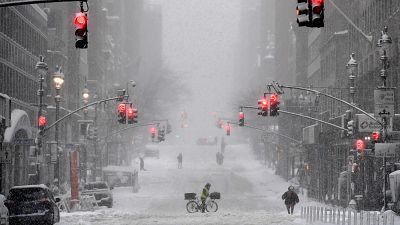 New York City is famous for many things, not least of all because it is practically guaranteed snow every winter, which producers are sure to feature in every Christmas film set in the city.

Videographers and photographers recently took to the streets to capture New York’s 2021 winter. The footage shows the sheer depth of snow the city received, and locals going about their day during the whiteout.

Why does New York get so much snow?

New York is one of the most drastic cities when it comes to the seasons. Hot, balmy summers and bitterly cold winters are the result of its location between the Hudson River and Atlantic Ocean.

The east coast of America is known to be colder than the west coast of Europe, despite both coastlines fronting the Atlantic. New York City’s average winter temperature is 0 degrees celsius, while Porto, which lies at the same latitude, averages 8 degrees.

This is all to do with various technical ‘-ologies’ including climatology and meteorology, but the same phenomenon happens over the Pacific too, where winters along Asia’s northeastern coast are much colder than in the Pacific northwest.

While the New York snow makes for a pretty picture, the recent storm has been classed as ‘major’, causing huge disruptions across public transport and flights, closing schools, and impacting COVID-19 vaccination sites.

Where are the best spots in New York to see the snow?

Many iconic shots of the city under snow have surfaced over the years. Of course, gaining elevation makes for a beautiful view of New York any time of year, so the classic Empire State and Rockefeller vantage points rank on the list.

Central Park, the city’s green space, can feel like a snow globe under the winter sky. This year, cross-country skiers were spotted in the park, and people were out making snow angels in the ground at Times Square.

The iconic Acropolis in Athens is covered in snow