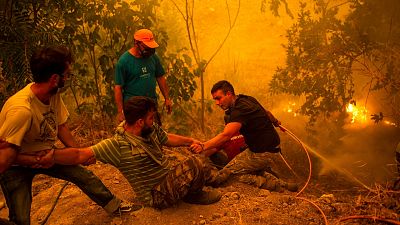 After the worst heatwave in decades, wildfires are burning in all corners of Greece as the country faces a "natural disaster of unprecedented proportions".

On Monday, Greek Prime Minister Kyriakos said that firefighters were tackling 586 blazes and 63 organised evacuations had taken place over the last few days.

One of the worst hit areas is the island of Evia where fires have ripped through forests in the north of the island.

It is particularly devastating as many people rely on these trees for their livelihood and local residents say the flames have already destroyed produce such as honey, olives and figs.

Local residents say the flames have already destroyed produce such as honey, olives and figs.

More than 800 firefighters are currently tackling the blaze including forces brought in from Ukraine, Romania, Serbia, Slovakia and Poland. Vehicles, planes, helicopters and more firefighters are also on their way from European and Middle Eastern countries.

But residents have complained about the lack of resources and say they feel as if they have been left on their own to deal with the fires.

On Monday, hundreds of people gathered outside the Greek Parliament in Athens to protest the government's handling of the disaster.

"We are afraid, we feel lost, we feel abandoned," says pregnant evacuee, Mina.

"You see the horror movie, you got afraid and you tell yourself 'okay this is movie' but now this is not the movie, this is our real life, this is horror that we live for the last one week, almost one week."

We are afraid, we feel lost, we feel abandoned.

More than 49,000 hectares of land have already burnt on Evia, over half of the island, with around 2,600 residents and tourists forced to flee via boat.

Local people have voiced anger at a lack of firefighting planes but authorities say they are experiencing "serious difficulties" due to turbulence, thick smoke and limited visibility.

"The villagers themselves, with the firefighters, are doing what they can to save their own and neighbouring villages," says volunteer Yiannis Katsikoyiannis.

"If they had evacuated their villages, as the civil protection told them to, everything would have been burnt down – perhaps even two days sooner."

Over the last few days, many have refused to leave their homes, staying behind to volunteer with firefighting efforts.

"We are all one, we don't have names. We are all fighters, locals. We came from the neighbouring village to help out voluntarily. No one is leaving," says an unnamed local resident.

"No matter how many times they evacuate us, we will stay here until the final moment to fight, to do what we can. There haven't been any aircraft."

In a televised address, Prime Minister Kyriakos apologised "for any weakness" on the part of the government.

"These last days have been some of the most difficult for our country in decades," he said.

"It is obvious that the climate crisis is affecting the whole planet. That is the explanation, but not an excuse, or an alibi. We may have done everything that was humanly possible, but in many cases this did not seem to be enough in the unequal battle with nature."

Press play on the video above to see how the wildfires are affecting local communities.