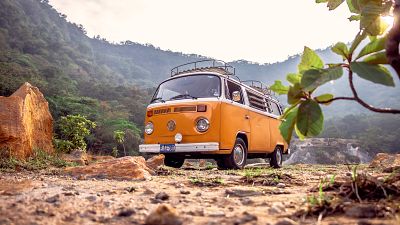 Campervans have undergone a rebrand. Gone are the days of sad campsites - autonomy and adventure are in.   -   Copyright  Alfonso Escalante
By Jenny Southan  •  Updated: 30/05/2021

While the idea of a holiday home on wheels might be an appealing one, particularly as we seek to avoid large crowds on planes and trains, the reality puts many of us off.

We’ve all been stuck behind a rickety caravan on a motorway with older couples in visors tootling along at maddeningly slow speeds. Or maybe it’s the memory of being cramped into bunkbeds in the back of a van for family holidays, driving through the torrential rain to a sad campsite, that’s tainted the idea of a road trip for life.

Whatever the reason, campervans, have suffered from a serious image problem – until now.

A new generation of adventurers, who call themselves 'vanlifers', are enjoying the autonomy, freedom and socially-distanced safety that comes with a van.

Vanlife is also cheaper, as your accommodation is already arranged and paid for. With many people now more aware of their carbon footprint, driving is also much lower carbon than flying.

So once you've arranged your home on wheels, whether that's by renting or buying one, the next question is where to take it.

Start in the beautiful Swiss city of Geneva and explore glorious lakeside life before heading off south to France.

One of the highlights of this 800km route is the Mont Blanc tunnel which takes you deep under the highest of the Alps and pops you out in Italy.

Continuing south from Turin, visit Florence then swing back north of the Alps via Milan.

Three countries, one campervan, and a number of beautiful historic cities – this route is perfect if you crave culture in between scenic stops.

Best for the Highland high life

Known as Scotland’s Route 66, the scenery on the North Coast 500 is stunning.

The route runs to Inverness and back, taking in the Highlands, West Coast and wildly rugged north coast, or you could venture off the tourist track to explore the Black Isle peninsula.

From the Norwegian mountains all the way to Saint Petersburg, Russia, this route takes in Oslo, Stockholm, the Swedish Åland islands and the Finnish capital of Helsinki.

From hygge hideaways to expansive vistas you won’t want to miss a minute of these 1,450km (that’s just the Scandinavian section) in the campervan adventure of a lifetime. Think of the Instagram posts!

Best for Big Adventures in Oz

Cairns to Townsville to Airlie Beach

Pack up your campervan with gear and set off snorkelling or diving the Reef.

This exotic drive also takes in Hinchinbrook Island where you can stop for hikes and to find magical swimming holes.

Another highlight is Wooroonooran National Park – head to Josephine Falls for a refreshing wash if the campervan water pressure is lacking.

Best for Families in no rush

The road trip to end all road trips. This is one of the most iconic routes in the world for a reason. We recommend starting your camper van odyssey in the north and heading south so that you drive in the lane closest to the ocean.

Start in Seattle and take your time heading down through Lincoln Bay, Leggett (where the US-101 turns into scenic Highway 1), picturesque Mendochino, San Francisco, Monterey, and ending up in LA – the perfect place to refuel in every sense.

Sustainability and the city: These are the world’s greenest locations