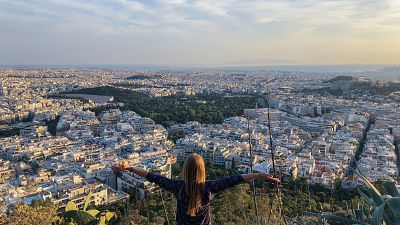 Greece is one of the first European countries to reopen for tourism. Tourists desperate for a holiday have wasted no time in getting over there. But this shouldn't put you off. The beauty of Greece is its hundreds of islands where overtourism isn't a problem. Even better, some of them are already covid-free.

But with the flexibility in working location that the pandemic has brought, why stop at a holiday? Especially when the Greek government are incentivising digital nomads to work from the Hellenic country.

Greece is working to bring more digital nomads to its islands

Thanks to legislation passed in the Greek Parliament last year, digital nomads who come to Greece can take advantage of a 50 per cent tax break for the first seven years. Ostensibly those are Greek taxes we're talking about, which is something to consider. You should of course check out tax laws in relation to your individual situation.

Why do countries want digital nomads?

Greece is not alone, of course, in the drive to draw digital nomads. Consider that Newton's third law of motion— for every reaction there is an equal and opposite reaction—also applies to people in motion. In other words, when the pandemic largely stopped tourism in its tracks entire governments will do cartwheels to recoup lost revenues.

Before the pandemic, low cost airfares and nifty marketing campaigns worked wonders to fill hotel rooms and keep beach bars hopping. But when lockdowns and pervasive apprehension pulverise package tourism, it's time for Plan B.

With digital nomads, the idea is to plug some of the revenue gap left by absentee tourists with a qualitatively more compelling brand of wanderer. Someone who spends more time in a given place tends to spend more money too. Making remote work a prerequisite for getting those tax breaks almost guarantees the nomad is going to spend more money over time than a typical touris woult.

Is Greece a good destination for digital nomads?

When countries around the world are dreaming up new ways to attract digital nomads, why choose Greece? Is a nice beach enough? Alex Patelis, the chief economic adviser to the Prime Minister of Greece, Kyriakos Mitsotakis, says, "Greece is naturally blessed with a temperate climate, lots of sunshine, and a combination of beaches and mountains."

He adds that other advantages are, "a strong currency, the euro, and the safety of the EU institutional framework." On the technical side, Patelis notes that 5G networks are already operational in major Greek cities (and they're coming to some Greek islands too) and that "tax incentives are targeting those who relocate to Greece."

Some countries, such as Finland and Estonia, have floated digital nomad visas (or in the case of Barbados, a digital "welcome stamp") which, sometimes for a set fee, allows you to live and work tax-free in the given country for a specific period of time, usually for up to a year.

Greece's model is a little different. "Greece is a member of the European Union so any EU citizen is allowed to live and work freely out of Greece," Patelis says. "Other than that, there are traditional routes to obtain work permits and/or temporary stays."

Visas and bureaucracy in Greece

Extended stays in Greece, as in most European Union countries, can be tricky to arrange if you don't hold a European passport, due to Schengen regulations. Remote workers with only British or American passports, for example, need to be mindful that they can only stay in Schengen countries such as Greece for 90 days in any 180-day period. After 90 days, they have to leave the Schengen zone for another 90 days before they can return.

Like any country, Greece has its fair share of bureaucracy and navigating it can be daunting for the uninitiated—though the website of Enterprise Greece can be a helpful place to start.

But whether you crave a change of scenery after being stuck at home in lockdown or simply because you'd rather look before you leap—a perfectly valid choice—you may find that "just" two months of going digital in Greece is already a lot better than a mere two-week holiday. After all, who says you need a tax break to call yourself a nomad? Once you board that plane you're already in the realm of the new, different and maybe a little risky, but also the potentially wonderful and productive.

All of that underscores what travel is supposed to be—less about frequent flyer points, more about discovery. So in this sense, the administrative aspects are just one part of the picture.

Which Greek island is best for digital nomads?

Consider this, though: if you get yourself all the way to Mykonos, do you really want to spend your time working there? I once did (though a spell of bad weather helped, as the beach wasn't an option) and later regretted it.

Remember that Mykonos is just one of hundreds of Greek islands, and probably not one where you'd want to spend a winter unless you find poetry in shuttered up shops and beach clubs.

For year-round sun there are plenty of other places like Syros, with its cosmopolitan island capital of Ermoupoli, dreamy Corfu and the largest Greek island, Crete.

Some smaller Greek islands like Astypalea, which is shaped like a butterfly that landed in the middle of the Aegean Sea, have even before the pandemic been courting a savvier sort of traveller that stays longer. The island's mayor, Nikos Komineas, recently said in the Greek press that "incentives will be given, such as subsidies, in order to keep people permanently in Astypalea. And this can be done with the development of systems such as the 5G network that will make it easier for employees to work remotely."

Of course if you're the type of nomad who needs a world-class city to inspire you, there's always the metropolis at the centre of it all, Athens. In fact, the City of Athens and the Athens Development and Destination Management Agency recently launched a #BetterInAthens campaign to showcase the Greek capital's digital nomad brigade (cue tales of sun-starved Brits who swapped Piccadilly Circus for the Parthenon).

As far as European cities go, Athens does have a relatively low cost of living, a scintillating array of cultural attractions both ancient and modern and enviable weather most of the year. And it's worth recalling that even though Thessaloniki is Greece's northern second city, it's still further south than Rome.

Bottom line? Just as you would do some basic research before venturing out on holiday, do your homework before embarking on any digital nomad odyssey.

The lifestyle switch from stuck-at-home (or stuck in traffic) five days a week to waking up with a shimmering Mediterranean horizon beyond your desk and demitasse of robust Greek coffee by your side—but not too close to the computer, if you please!—is definitely an appealing option. But ultimately the only person who can sort out the financial and bureaucratic tangle is you.

Once you've digested that, Greece's new digital nomad tax cut does emerge as a clear incentive for road warriors to pull up closer to the Parthenon—or maybe a nice ribbon of beach on an island shaped like a butterfly—power up the laptop and stay a while.

These countries were voted the best for expats in 2021

Greece officially launches its tourist season after 72% drop in 2020