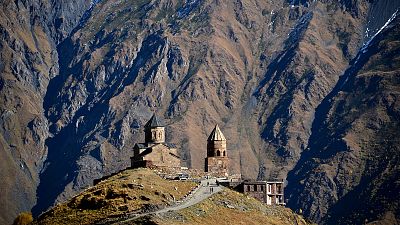 4th century Gergeti church in the village of Stepantsminda (former Kazbegi) close to Russian-Georgian border, some 160 km north of the capital Tbilisi.   -   Copyright  Kirill Kudryavtsev/AFP
By Euronews and AFP  •  Updated: 16/03/2021

A country that has become immensely popular in recent years as a tourist destination, Georgia is now seeing an influx of thousands of foreigners flocking from all corners of the world to work there remotely.

But the delicious local cuisine, culture and scenic beauty alone do not explain the interest of "digital nomads" in this nation of less than four million people, wedged between the Black Sea and the Caucasus Mountains.

"Life is much cheaper here, internet access is very good and security is better than in most countries in the world," says Candy Treft, 51, a former medical worker from the US:

Arriving in Georgia in 2019, this seasoned traveller has now opened a shared office space for teleworkers in a house in the old town of Tbilisi, the Georgian capital.

What I like most is the friendliness and openness of the culture. I'm an outsider but I never feel too out of place here

Georgia has already emerged as a tourist destination with the launch in 2004 of major infrastructure projects and the renovation of several city centres, such as the coastal city of Batumi and Mestia, at the foot of the mountains.

In 2019, around nine million tourists visited the country, more than twice the size of the Georgian population.

However, the COVID-19 pandemic dealt a major blow to this sector, which accounted for 5 per cent of Georgia's GDP. In 2020, the economy contracted by 6 per cent and lost over 100,000 jobs, according to official figures.

In the hope of compensating for these losses, the Georgian government launched a programme last summer to attract wealthy remote workers with the promise of travel despite anti-COVID-19 restrictions.

"This programme aims to attract visitors with high incomes in a situation where a massive influx of tourists is impossible," Tea Tchantchibadze, spokesperson for the National Tourism Administration, told AFP.

Live and work in Georgia for a year

The scheme allows nationals from 95 countries who can prove a monthly income of more than $2,000 (€1,670) to come and live and work in Georgia for a year. They must also have tested negative for coronavirus or been vaccinated against the disease.

About 2,300 people have applied for the programme, and more than 800 have already arrived in the country, says Tchantchibadze.

Georgia had the epidemic under control until late summer 2020, but the situation has worsened since September. By the end of February, the country had recorded nearly 270,000 infections, resulting in about 2,500 deaths.

Andrew Braun, a 28-year-old computer developer from New Jersey, US, says Georgia is "a great place to explore even in the time of Covid".

"What I like most is the friendliness and openness of the culture. I'm an outsider but I never feel too out of place here," he says, noting the increasing arrival of other "digital nomads".

According to him, they have diverse profiles but are attracted by a common curiosity and a "desire to explore".

Compared to ordinary tourists, he believes that these 21st century nomads "can immerse themselves a bit more in the countries and cultures" where they work.

However, this lifestyle also has its drawbacks and constraints.

According to a study by Britain's Cranfield University, companies tend to "reinforce" the workload of their remote employees "with demands that cannot be met within a certain time frame".

Overtime, round-the-clock e-mail, lack of holiday time or sleep: all of these practices are encouraged by remote working and can have a negative impact on health. Even in Georgia.

Not to mention the loneliness of travellers far from their families.

Braun admits that sometimes life is "better" when you work abroad. But sometimes, "you take all your problems with you, too".

Get into beach-based working with these 7 digital nomad destinations

These countries were voted the best for expats in 2021