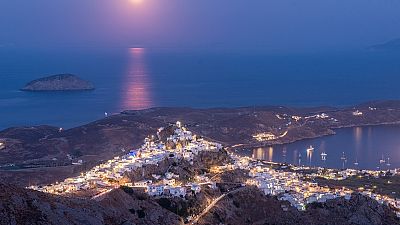 Serifos (pictured) is one of many under-appreciated Greek islands which were wooing tourists - even before the pandemic.   -   Copyright  stef_greece, Municipality of Serifos
By Anthony Grant  •  Updated: 09/11/2020

On the sidelines of the prestigious Capital Link Invest in Greece forum in New York City last December I found myself chatting with Greek Minister of Tourism Harry Theoharis about the prospect of charging tourists to see the sunsets in Oia on Santorini. It wasn't such a far-fetched notion: the term 'overtourism' was in vogue and applied to heavily Instagrammed, cruise ship-flooded global beauty spots like Venice and Greece's Santorini.

But any study of Greek history shows that almost nothing is predictable, and since March 2020 Greece — like most of the rest of the world — has been reeling from an unforeseen crisis that's had the knock-on effect of generating the polar opposite issue: undertourism.

Back in December, Theoharis revealed that Greece had just completed a study by the EBRD (European Bank for Reconstruction and Development) on Santorini and Rhodes.

This was carried out "to see exactly how we go about actively managing development instead of sort of letting it drift," while he also spoke to mayors about "formulating a plan to see how we can safeguard these destinations, adding sustainability in a way that doesn't clash with the local population."

Resetting the damage of mass tourism

Ironically if darkly, the pandemic has done the heavy lifting of hitting reset on the kind of mass tourism that, as recently as last year, was threatening to damage the environment and turn places like Santorini into glorified theme parks. So what about now?

"There's a local element to it in that we have loads of choices and loads of islands," says Theoharis, so that compared to many places "this idea of finding a destination's identity is much more important in Greece."

In the summer of 2020, many hotels in iconic destinations like Santorini and Mykonos tried to coax Covid-wary travellers into coming with assurances of strict adherence to new government-issued hygiene protocols.

Others, however, like the luxury Aegon Mykonos and the legendary Hotel Grande Bretagne in Athens decided not to open to guests at all.

Some destinations, meanwhile, tried to leverage their off-the-grid status to sharpen their identity in the minds of both Greek and overseas travellers.

The rugged yet dazzling island of Serifos

Serifos, an Aegean island of 75 square km and, like Santorini, is part of the breezy Cycladic archipelago.

There are no big chain hotels here and according to Stylianos Livanios, the island's Deputy Mayor for Finance and Tourism, the locals intend to keep things that way.

"We don’t target to mass tourism which will adversely affect our island’s natural beauty," Livanios says. "If we try to replicate the infrastructure of Mykonos or Paros, then we are going to lose our unique characteristics that distinguish Serifos from the other islands."

Rugged and starkly beautiful, Serifos is steeped in folklore rich with tales of pirates and kalikerades, or water fairies, and is perhaps not surprisingly endowed with a number of excellent and resolutely undeveloped beaches.

"We choose to keep our beaches free of sunbeds so that visitors can enjoy the blue and dazzling waters in privacy at more than 72 unique beaches," says Livianos.

Furthermore, he adds that any new hotels will be "small-capacity lodgings, far apart from each other, so that the island’s fine architecture and natural, vibrant energy can be preserved."

Even before the pandemic, the butterfly-shaped Astypalaia, one of the Dodecanese islands (of which Rhodes is the best-known) was trying to woo tourists with a campaign to become the world's first smoke-free island. Greece has one of the highest rates of cigarette consumption in Europe, and inhaling smoke and finding "butts on the beach" is a perennial nuisance.

As Europe tries gingerly to chart a course for post-Covid travel — even with the pandemic still a bleak reality — look for more of these kinds of sustainability-driven initiatives to persuade travellers that they can expect vacations that go beyond sunbeds and high-carb complimentary breakfast buffets (big hotel breakfast buffets are already verboten anyway).

Other islands for dodging crowds

Similar scenarios are playing out on other Greek islands of which, as the Tourism Minister Theoharis pointed out, there are many.

This past summer one of the more popular island getaways among Greeks was Kimolos, a small mountainous island almost due south of Serifos and just north of Milos, itself an island with remarkable scenery that's also growing in popularity.

Smaller islands will continue to exert a powerful pull on tourists looking to dodge the crowds. At just 35 square km Antiparos is a tiny island famous as the summertime haunt of actor Tom Hanks.

Reached by a ten-minute ferry from larger Paros and first colonised by Phoenicians in the 13th century BC, Antiparos is today a bit of party spot too and like some other Greek islands it was subject to unprecedented curfews and other anti-Covid measures this past summer.

But while an island like Mykonos would have to shed its identity completely to forgo its famously hedonistic vibe, places like Antiparos are increasingly set to draw culture vultures as well as sun-seekers.

On the uninhabited but archaeologically rich Despotiko, the newly excavated Sanctuary of Apollo is on course to open for visitors for the first time ever in 2021 — and that sun-baked isle sits just 700 meters southwest of Antiparos.

Basking in obscurity will be the new holy grail for both islands and those who manage to visit them.

Situated about midway between Naxos and Santorini, Ios is windswept, rocky, wild and sometimes startlingly empty, too. Even in a busy summer, which 2020 emphatically was not, Instagrammers and cruise ship passengers are in refreshingly short supply on an island well-known by the backpacking crowd for its wide Milopotas beach and other sandy spots.

But Ios also has a lock on Hellenic heritage bar none, being the home of Homer’s Tomb. This literary pilgrimage site is set with quiet fanfare on a lonely, almost mystical promontory on the northern tip of the island.

Not all roads lead to Nisyros, which is probably how the islanders like it. But if you're willing to take a 13-hour ferry ride from Piraeus, the port of Athens — the shortcut being a flight to Kos and then a much shorter boat ride — you are in for a genuine Greek island treat and vistas reminiscent of Santorini.

A precipitous rock crowned with the 14th century monastery of Panayia Spiliani rises above colorful Mandraki harbour, while in the interior there are three volcanic craters with steam and sulphur regularly puffing forth from the ksephysitres, or natural vents in the earth.

The beaches tend to be black and pebbly, such as Xoxlakoi and Pachia Ammos, but even in the height of summer can also be wonderfully deserted.

In Ermoupoli, the unhurried but cosmopolitan little capital of Syros, you could almost expect Catherine Deneuve to be strolling about the elegant Italianate architecture — no wonder, as the French screen legend once had a home here.

Ermoupoli is actually the capital of the South Aegean region and flourished as a port city after the Greek Revolution broke out in 1821 when refugees fleeing islands under Ottoman occupation settled there, helping it grow and prosper.

Like the nearby island of Tinos, where Mareva Grabowski-Mitsotakis, wife of Greek Prime Minister Kyriakos Mitsotakis, has a summer home — Syros is gaining a reputation as a foodie destination too, with many restaurants placing a renewed emphasis on fresh local ingredients.

While it may be a tricky time to make solid travel plans, many destinations are already thinking ahead.

"If there are positive developments in the pandemic fight, we think that the tourism season will restart in April," says Livanios of Serifos.

Against a backdrop of many unknowns, what's sure is that if overtourism encroached on some island settings before, the reverse is now set to shape things to come—but in Greece, tourists willing to trade sizzle for serenity will find a warm welcome wherever their island wanderlust takes them.

Even Santa’s helpers are at risk of redundancy this year