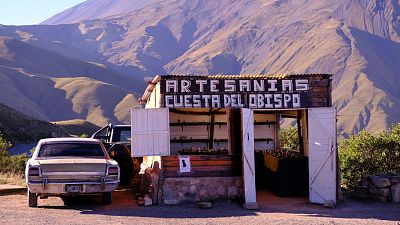 At times it’s hard to know where you are in northwest Argentina. It’s not just the staggering diversity in the region’s landscapes or the patchy GPS coverage – it’s also the area’s striking resemblance to the southwest United States.

Venture into the provinces of Salta and Jujuy, bordering Bolivia and Chile’s Atacama Desert. Here you’ll find the salt flats of Utah, the red rock canyons of Arizona, the adobe houses and cactus-strewn high desert of New Mexico and the rugged hills and vineyards of California – all within several hundred kilometres.

This is the only part of Argentina where the indigenous Andean culture survived the colonial era. Throw in the bustling atmosphere of the provincial capital Salta and the numerous wine estates around Cafayate, and you’ve got a recipe for a perfect road trip. As transport options are limited and photo opportunities galore, renting a car really is the only option that makes sense.

With cheap air connections to Buenos Aires, the lively city of Salta is the gateway to the region. But don’t hit the road just yet, Jack – at least not before climbing the hill of Cerro San Bernardo for a birds-eye view (take the cable car unless you’re very fit).

From up here, Salta appears a typical Hispanic colonial city with straight roads, shady plazas and extravagant churches. The region also has a rich pre-Columbine history whose influence continues to be felt today in its culture and traditions.

First, there’s the food: besides its juicy, peppery empanadas, a version of the meat pies found all over Argentina, Salta has a reputation for traditional Andean dishes. Drop into Doña Salta on Calle Cordoba to try these local specialities.

Then there’s the distinctive local musical culture, best reflected in the city’s peñas, a blend of Hispanic and indigenous Andean traditions that celebrate the folklore of northern Argentina. Featuring dancing, drums, guitar and violins, a peña is often a raucous performance, in which audience participation is actively encouraged. Try the popular La Vieja Estación, or the more authentic La Casona del Molino, where musicians turn up spontaneously.

Before leaving, don’t miss the Museum of High Altitude Archaeology. One of Argentina’s best, its star exhibit is the Children of Llullaillaco, considered by experts as some of the world’s best-preserved mummies. These are the hunched remains of three Inca children, sacrificed over 500 years ago near the summit of a 6,739 m Andean volcano on the Argentina-Chile border.

Salta lies amid lush green woods and meadows, but once you set a course southwest it’s not long before the landscape begins to shake itself into foothills, funnelling the road into narrow valleys. Soon your engine will be straining on the ascent of the Cuesta del Obispo (“Bishop’s Hill”), a spectacular serpentine that reaches 3,154 m above sea level at its highest point. Entering the Calchaquí Valley, the landscape opens up into a desolate high-altitude desert traversed by guanaco herds and dotted with fields of towering furry cacti.

With its white adobe houses, window grilles and colonial plaza, the village of Cachi is straight out of a Sam Peckinpah film. In fact, the whole area is a rustic vision of the Wild West – roadside shrines, ruined haciendas, tumbleweed, goatherders, gauchos in wide-brimmed hats kicking back on the porches in the shade.

Crouched at the foot of the snowy peaks of the 5,000-m Nevado de Cachi, the village enjoys a stunning setting. Cachi’s tranquil vibe means few visitors limit their stay to one night.

One of Cachi’s distinctive features is the use of the porous wood of the local cactus variety in its adobe architecture. The ceiling beams of many buildings are carved from the material, including the Iglesia San José, a Spanish colonial church on the central plaza. Even the confession booths are made from cactus.

From Cachi, there’s only one option for the adventurous of spirit – driving the 157 km south along the Calchaquí river on unpaved road to Cafayate. The route follows Argentina’s iconic Ruta 40, which shadows the Andes all the way down the country to the windswept expanses of Patagonia. Here, in its infancy, the highway is a ragged, rebellious dirt track that will test your nerve as it cuts sharply around dry arroyos and through ravines.

It’s possible to reach Cafayate in three to four hours, but it’s more rewarding to take it slowly and soak up the widescreen landscapes and the languorous atmosphere along the way. The village of Molinos is a sleepy settlement, with low houses shuttered against the blinding desert light. Climb the belfry of the local church for a view of the plaza.

The scenic highlight of the road to Cafayate is undoubtedly the drive through the dusty Quebrada de las Flechas (“Valley of the Arrows”), a tightly packed sea of serrated rock formations that look like something from an alien world.

If Cachi brings New Mexico to mind, then the peaceful town of Cafayate conjures up northern California’s Napa Valley – and not only because of its crisp air, dry climate and rugged hills. One of the world’s premier grape-growing centres, Cafayate is home to dozens of vineyards producing top-quality wines. The most atmospheric among them are Finca Las Nubes and Bodega El Esteco, graceful estates with views of the mountains.

Just 20 km outside Cafayate on the road to Salta, the Quebrada de las Conchas is the equal of anything you’ll see in Arizona bar the Grand Canyon itself. Come before sunset and scramble up one of the outcrops for a heart-stopping panorama of red rock ridges and ravines before returning to Cafayate for dinner.

It’s a three-four hour drive back to Salta, but allow extra: for the first two hours the road winds through a succession of terracotta canyons with soaring walls. There are spectacular viewpoints all along the road, including several places where you can walk into deep defiles in the rock. Ignore the busy La Garganta del Diablo and drive on to El Anfiteatro, a towering natural enclosure with acoustics befitting of a concert hall – try it.

Rumble in the jungle

Once back in Salta, it’s a short drive north into neighbouring Jujuy Province. But instead of taking the modern highway, consider buckling up tight for the thrilling ride along the old Ruta 9, the Camino de Cornisa.

This 92-km corkscrew twists and wriggles its way through the steep hills and forests of the Yungas, a humid region of dense semitropical jungle that stretches from eastern Peru down through Bolivia and into northern Argentina. The road is narrow and at times clings precariously to the sides of the valley, so it’s not an option for the faint-hearted.

The contrast with the arid landscapes of Salta is astonishing: all of a sudden, you find yourself in a world of sinuous, liana-hung trees and lush vegetation. These narrow green ravines are teeming with wildlife: Butterflies flash across the road, the air echoes with the staccato calls of tropical birds, and you may even see a tapir or peccary.

Beyond the regional capital of San Salvador de Jujuy, the highway sweeps steadily uphill into a deep Andean valley flanked by multi-coloured crags. This is the Quebrada de Humahuaca, an ancient trade route whose human history goes back 10,000 years.

The area’s rich cultural heritage has seen it designated a UNESCO World Heritage Site. The valley contains a string of indigenous villages, where many of the maté-sipping locals still use ancient farming practices and bake dishes in clay ovens. Near laid-back Tilcara, one of Argentina’s oldest continuously inhabited settlements, you can explore the remains of a Quechua fortress from pre-Inca times.

A few kilometres before Tilcara is Purmamarca, an indigenous village overlooked by the undulating red, purple and orange strata of Cerro de Siete Colores (Seven Colours Hill), a worthy rival to Peru’s “Rainbow Mountain”. The Paseo de Los Colorados is a short hiking trail that leads up the hill, opening up spectacular views of the rock formations, which are 600 million years old.

In the evenings, some of Purmamarca’s bars offer a more intimate version of the Salta peña, with hard-bitten musicians growling songs of tragic love and Quechua legends.

Beyond Purmamarca, the road bounds swiftly up a side valley before beginning the epic climb towards the Chilean border, located around 4,000 m above sea level. Named the Cuesta de Lipán, this dizzying series of switchbacks carry you up into the clouds and beyond. Eventually, you’ll reach the Salinas Grandes, a vast expanse of glittering salt ringed by distant mountain ridges. These salt flats might be little more than a spot on the map compared to the endless spaces of the Salar de Uyuni across the border in Bolivia, but at just over 200 sq km they are still the world’s third-largest.

At this point, it will be hard to resist the seductive call of Chile’s Atacama Desert, but since most car rental companies won’t let you leave the country, it’s time to set a rueful course downhill for Salta and come back down to earth. Just make sure your brakes are in good condition.