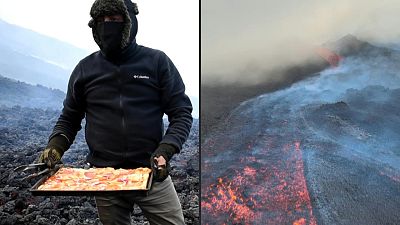 Chef David Garcia has created a new dining experience to take advantage of the lava.

Where is Pacaya Volcano?

Pacaya is one of three active volcanoes in Guatemala. It is located in the south, about 25km south of the country’s capital, Guatemala City.

It was dormant for around 70 years before a huge eruption back in 1961. Since then, the region has experienced regular eruptions and volcanic activity.

During this year’s eruptions “Pacaya has expelled ash up to 500 meters from its crater, located 2.5 kilometers southwest of the cone”, says the Vulcanology Institute.

The activity has produced a lava flow 2.2km long on the west flank of the volcano.

It is this lava flow that chef David Garcia has turned into his outdoor kitchen.

“It was difficult for me to learn the technique here so as not to burn the pizza,” explains David.

“It is also a risk to be on the shore because the temperatures are as high as 1500, 2000 degrees, so I have to watch the wind direction so it doesn't affect me."

Watch the video above to get a taste of the action.