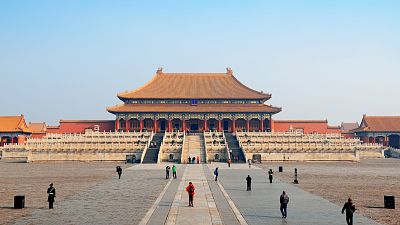 It was the summer of 2019, and my grandmother had just died, three days before I was scheduled to fly out on a so-called trip of a lifetime to China. I was 18 at the time, and after the pressures of school exams, alongside the background anxiety of my mother’s own health problems, the death of my grandmother sent me into free-fall.

With any kind of difficult emotion, there is an expectation of how to act. There are whole industries targeted around ways of doing it, with both the psychological and the spiritual playing a part in the big business of emotional management.

With grief, there’s even the famous 7 stages of grief, acting as a perverse step-by-step guide on how to live out your mourning journey.

In spite of all these guides and expectations, however, grief felt completely new.

China quickly became the backdrop to my learning and understanding of how people grieve and commemorate life.

By travelling at the beginning of my grieving process, China quickly became the backdrop to my learning and understanding of how people grieve and commemorate life.

The trip of a lifetime

In the days leading up to the trip, I constantly went back and forth about whether I should go or not. I feared for how my family would cope if I left and kept having visions of myself having a complete breakdown on top of the Great Wall of China.

In the end, my family urged me to go, and, after much persuading, I left.

The trip had been organised over a year in advance, and I had worked tirelessly at sad-looking restaurants and fast food places to save up enough money to afford to go. Starting off in Beijing, a big group of us would descend on all of the capital’s most iconic sites, before taking a sleeper train to Xian, China’s former capital, and a key destination along the silk road.

After that, we would be travelling to Chengdu, home to China’s research base for Giant Pandas, before finally flying to Shanghai to end the trip in style.

After a long and emotionally exhausting journey involving several connecting flights, we arrived in Beijing. Finally, it felt as if I was free from my grief, and able to totally immerse myself in a culture completely foreign to me.

However, it was after the first few days of the trip that it became clear that my grief had followed me to China. In attempting to leave behind any ideas of death in England, I somehow found myself surrounded by death and memorials to lives well-lived.

I somehow found myself surrounded by death and memorials to lives well-lived.

It was upon visiting the Forbidden City, the former home of China’s reigning Emperor, that I was faced with physical reminders of death and the memorialisation of lives lost. When entering the Forbidden Palace, visitors are greeted by a portrait of Mao Zedong, who governed as China’s first communist dictator from 1949 to 1976, hanging down over the Gate of Heavenly Peace.

Mao’s Mausoleum is situated nearby, and is constantly flocked by Chinese citizens wishing to share in public mourning, despite his death happening over 40 years ago. Just by being in the presence of Mao’s embalmed body, it is said that many mourners become visibly emotional, crying and sometimes physically breaking down in grief at his loss.

As someone still so wrapped up in grief myself at the time, I found it truly staggering coming to terms with the impact Mao still has in China today, and how this memorialisation still shapes the lives of so many. With the violent excesses of Mao’s rule still at the forefront of many people’s concepts of Chinese history, it is difficult to understand quite how this loyalty continues to live on.

The universality of grief

However, it was when I visited the terracotta warriors, and the mausoleum of the first Qin emperor, that I began to understand how our commemorations and memorials to death shape our history and culture more broadly. In Chinese culture, it is believed that the souls of the dead lived in another world, ‘the nether world’, and graves were their earthly residences.

In an attempt to preserve the legacy of Qin Shi Huang, and to protect his spirit in the afterlife, he was buried with a replica of his personal armies, all cast in terracotta.

As I discovered these deliberate, systematic ways in which previous generations chose to bury their dead, I came to understand that burial processes serve a higher purpose than purely emotional catharsis.

By creating a physical archive of a person’s legacy through the burial process, it allows us to both memorialise the individual, and the process of grief itself. We are able to understand cultures on both a historical and emotional level, by understanding past grief.

In this way, grief becomes universal - what someone felt in the Qin Dynasty when grieving the loss of their Emperor, can be felt by someone in the modern day, mourning the loss of our own loved ones.

In planning this trip, and seeking out the most iconic sites of Chinese history and popular culture, I realised that commemoration and public grief is a way in which populations connect and define themselves.

Rather than purely commemorating the dead, sites of remembrance are places which allow universal understanding of ourselves and the emotions we all face as humans. In reconciling my own feelings of loss, I found great comfort and solace in how universal the grieving process can be.

Wine tasting in Burgundy: The most famous Pinot Noir on the planet