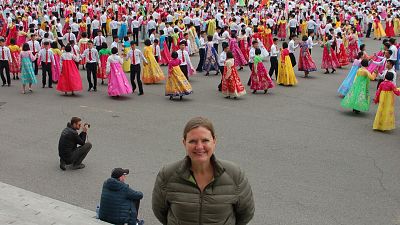 South-African born Lisa Jackson is a travel writer who has visited almost 100 countries and completed over 100 marathons (and proudly come last in 25). In this extract from her most recent book, she details her experience as a tourist in North Korea.

“I’m so paranoid my guidebook will be confiscated that I’ve torn it into sections to stuff down my trousers when we get to Pyongyang,” confessed Amelie, a Parisian accountant, as our train trundled towards North Korea’s capital.

I was nervous too: before I’d departed on this group tour, several friends joked that they’d bought paint to make posters to campaign for my release.

“Who knows why we all wear a badge with Presidents Kim Il-sung and Kim Jong-il on the left side of our jackets?” asked our guide Joo en route to the Mansudae Grand Monument on day one of our tour.

“So they don’t get shot?” whispered Bruce, a rangy Australian.

“It shows that our Great Leaders are always close to our hearts,” said Joo.

I took this as a sign of how thoroughly indoctrinated North Koreans are.

"You must bow to the statues."

Sure, some Americans sport ‘I love Trump’ badges, but in North Korea you’d never see the equivalent of a bumper sticker reading ‘Elect a clown, expect a circus’. Come to think of it, that’s because there are no private cars in North Korea to stick bumper stickers on, as much as it’s down to unquestioning loyalty to the Kims.

“There are two rules you need to obey,” said our second guide Sonu. “Firstly, you must bow to the statues. If you don’t want to bow, stay on the bus. Secondly, your photographs must always include the whole statues. You mustn’t chop off their feet or heads.”

“It’s very disrespectful to let his face touch the ground”

We strode up a tree-lined road and were greeted by 20m tall bronze statues of North Korea’s founder Kim Il-sung and his son Kim Jong-il.

Our group’s synchronised bow was judged a success. “Thanks for showing your respect,” Joo said.

As we congratulated ourselves on mastering North Korean Leader Etiquette, both guides rushed up the aisle of the bus to retrieve a newspaper featuring a photo of Kim Jong-un on its front page that had fallen on the floor.

Although spectacular, attending a Mass Dance featuring thousands of women dressed in kimono-style robes paired with men dressed identically in black trousers and white shirts, and our circus visit afterwards, were nothing compared with the grand finale to the most action-packed day of my life: the Arirang Mass Games.

Intended as a propaganda tool, the 100,000-participant Games outshone every Olympics opening ceremony I’d seen. In the stands opposite, 17,000 schoolchildren drafted in as human pixels created scenes of incredible beauty simply by turning the pages of the flipbooks they hid behind.

An image of an elderly man waving a North Korean flag appeared as if by magic, to be almost instantaneously replaced by one showing children running through a flower-strewn field.

Cheerleader-style pyramids, kung-fu brick breaking, uniformed marching bands: it was impossible to take everything in.

“God, that was amazing! Did you see the ice skaters on the mini ice rinks?” gasped Bruce. “Ice skaters?” I replied. “No, but did you see the human cannonballs?”

I marvelled at how effectively North Korea’s PR machine had worked its charms. No matter how often I reminded myself that it was ruled by a brutal regime that executed ‘traitors’ using anti-aircraft guns – the current Supreme Leader Kim Jong-un’s own uncle had met this dreadful fate – I couldn’t help but feel deliriously happy.

“I’m guessing you all enjoyed that,” said Joo, beaming.

“No, in London we watch something like that every Tuesday,” I joked. “It’s no big deal.”

Back at our hotel I rushed off to call my husband Graham. Conscious that the phone was most likely bugged, I told him in one stream-of-consciousness sentence about all the amazing things we’d crammed into our trip.

I kept my misgivings about seeing workers toil in the fields picking rice by hand to myself, along with the fact that, besides our guides, we’d not been allowed to interact with a single local.

Besides our guides, we’d not been allowed to interact with a single local.

“You’ve been an amazing group,” complimented Joo as we said our goodbyes at the station. “You probably think I say this to all my groups, but yours was very special.”

As Joo and Sonu waved our train off, I was overcome with emotion. Despite the Truman Show nature of our carefully curated tour where we’d seen only what the state wanted us to see, I’d grown fond of this fascinating country and also of Joo, and it seemed such a shame I’d never see either of them again.

Tears welled up in my eyes and soon I was sobbing.

“You must be the only person who’s ever cried when leaving North Korea,” said Amelie.

“I probably am,” I said, blowing my nose.

Every weekday at 21.00 CET, Euronews Travel brings you a story from somewhere different around the world. Download the Euronews app to get an alert for this and other breaking news.It's available on Apple and Android devices.

What is happening with tourism in Tel Aviv right now?