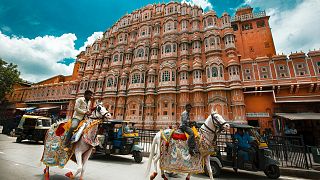 Some are believed to have been divinely-inspired. Others, to set themselves apart from the crowd and attract visitors. Either way, these places, painted by their residents in a stunning palette of colours, are a feast for the eyes.

Generally painted a uniform colour, these towns, villages and even islands are possibly the most chromatic locations on the planet.

Tourists haven’t found Izamal en masse yet which means this photogenic, mood-enhancing town on Mexico’s Yucatan peninsula still feels off the beaten track. The reason why the centre of the town is painted in a blazing golden yellow is debated. It was believed that Izamal was covered in Vatican yellow in honour of Pope John Paul II’s visit in 1993.

However, there is reason to believe it has been a feature for much longer - that it was painted yellow to help ward off a plague. The town itself is on the site of ancient Mayan ruins said to be dedicated to the sun god, hence the honey hues. It depends who you ask but either way, Izamal is dazzling.

The secret of Chefchaouen is well and truly out. Instantly recognisable, its cobalt blue-rinsed streets have attracted the most intrepid explorers and Instagram influencers alike. As with Izamal, there are several theories as to why this mountainous Berber town is largely awash of vivid blue paint.

Known as the "Blue Pearl," Jewish settlers are believed to have first painted the town in the 1930s to either symbolise heaven - or as a means of repelling mosquitoes. Which is true? We couldn’t say, but it has given the town its unmistakable air of mystique.

Like a mirage shimmering on the crest of a rocky hilltop, the whitewashed town of Vejer de la Frontera is the quintessential Andalucian village. The brilliant white of its buildings, contrasted against blue skies, is not the only attraction that brings visitors to this village near Cadiz.

Its maze of medieval laneways and cobbled streets lead to sleepy squares lined with restaurants serving locally-inspired dishes. Maintenance is a serious business, with villagers repainting any worn-looking buildings annually.

It’s not just the buildings on the islands of Banwol and Bakji that are lilac purple - the 150 islanders dress head to foot in purple too. In a bid to reinvent itself, attracting travel-hungry local visitors - particularly young people - during the pandemic, South Korea’s "Purple Islands" have put themselves on the map.

As well as purple roofs, there are fields of lavender and asters, not to mention a snaking purple bridge between the two islands. The restaurants on the islands also serve purple rice.

Although it faces stiff competition, Rajasthan is considered to be the most colourful region in India. The Land of the Kings has not one but two cities of colour, the first being Jodhpur, India’s "Blue City".

Sitting in the shadow of the mighty Mehrangarh hilltop fortress, a jumble of indigo blue houses stretches out from the slopes of the imposing outcrop. The fort ramparts offer spectacular views of the blue cubed houses but for the best experience, you have to amble the labyrinthine streets and experience the city at close quarters.

It used to be that visitors to Júzcar were attracted to the area by local hiking trails and adventure activities like canyoning in the surrounding Valle del Genal. That is before the small Andalucian village became the "Smurf Village" in 2011, when it hosted the world premiere of the film The Smurfs. Houses and even the village church were painted sky blue, the majority of which are still blue over a decade on.

As one of the best places in India to celebrate the festival of Holi, it stands to reason that Jaipur itself would be a colourful spot. Rajasthan’s capital has many claims to fame, including being one of the first planned towns in the world.

The old centre of Jaipur - known as the "Pink City" - is no longer the vibrant rose pink it once was, pink being a colour of hospitality and welcome. The uniform colour, which is now more of a peach or terracotta, still beguiles visitors to the city.

What is happening with tourism in Tel Aviv right now?