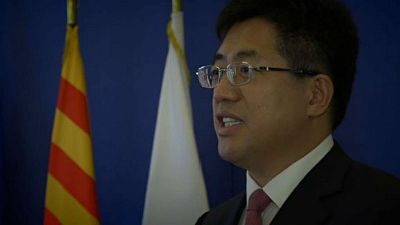 Euronews travelled to Nice to take part in the 4th edition of the Franco-Chinese Cultural forum.

A presentation and meeting, attended by dignitaries from both nations, was held at the beautiful Opera house in Nice on Wednesday.

Spirited addresses by the host, the Mayor of Nice, Christian Estrosi and former French Prime Minister Jean-Pierre Raffarin accompanied keynote speeches from Chinese representatives, including the Mayor of Sanya, Mr A Dong.

The mayor spoke to Euronews after the forum and was able to discuss the cultural similarities between his nation and France, as well as expounding on his up-and-coming destination.

Watch the interview in the video package above.

Sanya is the southernmost city on Hainan Island in the South China Sea and is possessed of a meandering shoreline stretching across 250 kilometres.

The natural beauty of the area was chosen by the mayor as one of the destinations three most important facets. The others were the fact that the island is steeped in history, and the investment in the area - particularly the free-trade initiative at the port - offers the hope of a bright future.

The mayor stressed that, aside from jobs created by tourism, there will be other advantages for people on the Island, with particular emphasis on Hainan's youth.

A direct flight between London and Sanya is already up and running bringing Hainan island within easy reach of Europe.

Flights are also being planned from Germany. Visitors from 59 countries can now get 30-days of visa-free travel too.

"Definitely worth the 12 hour flight": Why visitors are drawn to Sanya