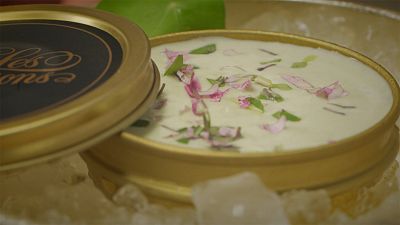 Thierry Voisin is the French Michelin-starred chef of the "Les Saisons" restaurant qt the Imperial Hotel in Tokyo.

He explains how to create one of his signature dishes, made from Yellowtail, one of Japan's favourite fish, called "buri".

Tasty and very elegant, it's perfect to impress your dinner guests. Why not try it at home and become a true chef?

Cut the fillet in small cubes, salt and pepper

Whip the cream until stiff

Put the yellowtail into a container

Pour over the consommé and refrigerate a few minutes

Pour the whipped cream on top of the yellowtail cubes

Sprinkle some chopped herbs and flowers

Lay the dish in an ice bucket, like caviar

Konjac: the future of health food is already here

The secret of making Sake