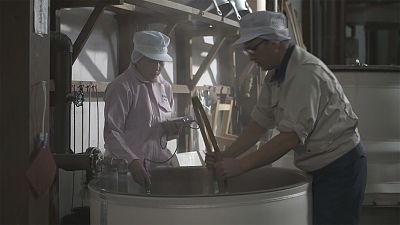 Follow in our exclusive video each step in the Sake production process:

When the Sake rice arrives at the sake brewery, the first step is to mill and polish it. The notion of rice polishing is essential for determining the quality of a Sake.

Rice is laid in the steamer and steamed from below. This process usually lasts about an hour.

Koji-kin is a mould. Koji is rice that has this mould growing on it. The rice is spread out on long tables in the koji making room. After about four days, the mould fully covers each grain.

The Shubi is the fermentation starter or yeast starter. Yeast, water, steamed Sake rice and koji-rice are mixed together.

In the main brewing tank, water, rice, koji-rice and the fermentation starter are added.

Once the Sake has finished fermenting, the newly-created alcohol is separated from the unfermented rice solids left in the mash.

The Japanese Yellowtail and the "Blue Revolution"