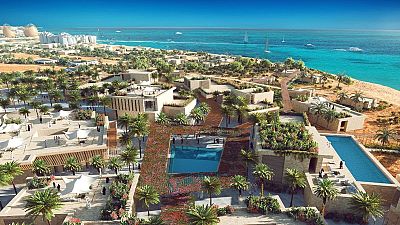 A huge tourism push is underway in Saudi Arabia. Crown Prince HRH Mohammad bin Salman is ploughing billions into new hotels and attractions in a bid to make Saudi Arabia the Gulf region’s next luxury tourism destination of choice.

He’s determined to do it in an eco-friendly manner too. From properties bordering desert UNESCO heritage sites to mega projects on unspoilt coastline, making these builds sustainable is a massive undertaking.

We asked architects from HKS, who have won the tender to design an zero-carbon resort on the Red Sea coast due to open late next year, how they intend to keep the environmental cost negligible.

The firm has been tasked with preserving the environment as much as possible, and using its location in a group of three natural bays to its advantage. All the while ensuring the build and running of the resort leaves no carbon footprint. Its name will be Amaala.

Amaala is set to contain three resorts along its 12km long stretch of coastline, around 800km north of Jeddah. Two of the complexes are being designed by HKS as well as the masterplan for the city, which broke ground in the middle of last year.

It has been envisioned as a high-flyers' playground, with facilities open year-round to tourists expected to flock to there to pursue activities such as yachting and diving.

The reefs on the Egyptian side of the Red Sea have been quite badly abused by mass tourism, so their preservation and conservation was paramount when taking on the project, according to Kevin Underwood, planning and design lead in EMEA and head of the hospitality market sector at HKS.

“We’re going to great lengths to protect the coral reef, the turtles and any animals that call this piece of coastline home,” he says.

“With such an exclusive resort, we’re expecting smaller volumes of tourists than in Egypt, while diving programmes will be modelled on schemes in the Maldives where visitors speak with ecologists so they’re educated before they head into the water.”

His team is also planning for a marine institute, which will sit both above and below the waterline to observe the sea life from all angles, with a view to increasing understanding and conservation the natural habitat.

Meanwhile, the three distinct zones of the Amaala project will have very distinct functions and personalities. The first will be health, wellbeing and sports-focused, containing a research institute, medical wellness resort as well as centres for restorative wellness.

Its purpose will serve both as a luxury destination and an educational centre to cope with the Middle Eastern region’s obesity and diabetes epidemic, says Underwood. It has been designed as such because the initial influx of visitors is expected to come from nearby Gulf regions.

The second complex is set to come to life as an arts and culture centre, with a village feel. It will contain museums and play host to cultural events from around the globe. The third, the only one not designed by HKS, is offshore on an island just out in the Red Sea. That island destination is set to become another cultural hub, offering a Riviera-style retreat.

Amaala’s plans for absolute sustainability means water will come from a desalination plant fed by the sea and powered by a desert solar farm.

However, the architects are hoping to minimise the need for electricity from temperature control in a region where even in the depths of winter, temperatures rarely dip below 20C. “They will be super insulated, and avoid unnecessary glass panelling to avoid solar gain,” Underwood told Euronews Living. “And they’ll be positioned to keep one another in the shade, angled away from the worst of the midday heat.”

Designers behind the project and HRH Mohammad bin Salman hope their measures will result in a thriving tourism destination that will prove popular with even the most eco-conscious tourist. But to cater to them, a new airport will be necessary to reach its remote location.

While plane travel to arrive may be necessary, Underwood says there will be a new fleet of Amaala-branded electric cars introduced to ferry new visitors to and from the resort, so as not to introduce a horde of gas guzzling supercars into the region. He’s even making provision for those cars plenty og chargers to ensure the fleet get their juice from the solar farm.

“A lot of people are sceptical are about the development works going on in Saudi right now,” concludes Underwood. “But HRH is moving things forward in a positive way, and putting his head above the parapet in a way that’s rarely seen in such a conservative society. It has to be little steps.”

In Spain, as in Europe, gas is crucial for the delivery of the energy transition ǀ View