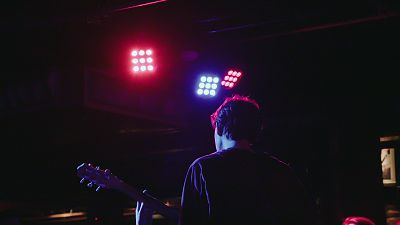 Cleveland, Ohio was one of the first stops on acclaimed Northern-Irish singer-songwriter Foy Vance's musical tour of the US.

The city is referred to by many as the 'cradle of rock’n’roll', and a visit is not complete without going to places like the Rock and Roll Hall of Fame. But be sure not miss the B-sides, “there's none of the homogeneity you find in other cities" says Foy.

One of Cleveland’s great places is The Grog Shop, one of the city’s most popular rock clubs for the last 26 years, and the place to be for up-and-coming bands.

“Everyone has played here on their way up -- Oasis, Spoon, Flaming Lips, Yeah Yeah Yeahs…”, says Laura DeMarco, a third generation Clevelander, and the author of two books on the history of the city.

A music venue with "killer energy" in Foy’s words, here, he was captivated by American band Frankie Cosmos. The indie pop/rock band is led by Greta Kline, the 24-year-old daughter of Oscar-winning actor Kevin Kline, and actress Phoebe Cates.

Kline started writing music when she was only 13 and her discography includes some 45 releases. The band has nearly seven-thousand Spotify listeners a month, and New York Magazine praised their album ‘Zentropy’ the best pop album of 2014.