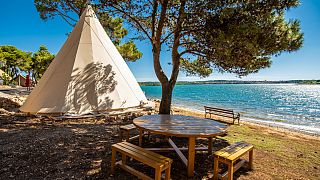 Summer is here and a new season of lifestyle experiences has begun in Croatia. If you're in the midst of planning a trip, we've come up with a handy round up of ten brand new things to do, taste, see and experience in July and August.

Go glamping by the sea near Pula

Campsites have long been a popular accommodation option with sun- and sea-seeking tourists to Croatia. Now, thanks to the glamping trend, getting close to nature no longer means leaving behind all the comforts of modern living. If you're looking for a seaside refuge with a touch of luxe, head to the newly opened Arena One 99 Glamping in Pomer near the historic city of Pula – famous for its 1st-century Roman amphitheatre.

You'll have a choice between luxury tents or cabins set under pine trees with views of the Adriatic Sea. Each is equipped with perks like air-conditioning, Wi-Fi, flat-screen TVs, Illy espresso machines, and luxurious bathrooms, while cabins add extras like kitchenettes and balconies. Those who love active holidays can join the on-site windsurfing school or head out on one of the many jogging and bike trails. If it's some serious R&R you're after, check out the outdoor wellness area and its hot tubs, massage room and yoga deck.

Have a fusion food experience in Split

Tucked away in the rambling lanes of Split's massive Diocletian's Palace is one of the city's newest eateries. Set in a gorgeous medieval-era stone house and its charming adjacent courtyard is Kinoteka Food and Bar. On the menu is an eclectic selection of Asian and Mediterranean fusion dishes complemented by over a dozen signature cocktails crafted by Julian Bolenz – declared London's best bartender at the 2017 London Club & Bar Awards. The theme of this popular nightspot is the film world – a homage to the long-time cinema located upstairs. Vintage cinema posters adorn the walls, and refurbished cinema seats are dedicated to film stars like Frank Sinatra, Bette Davis and director Francis Ford Coppola.

Head back to the past in Zagreb

This summer head back to the past at a recently-opened exhibition in Zagreb that explores the fascinating era of the sixties. 'The Sixties in Croatia – Myth and Reality' runs until the end of September at the Museum of Arts and Crafts. During this tumultuous time marked by great political, economic and cultural changes, Croatia was one of the republics making up Yugoslavia. This multimedia exhibition explores the period from 1958 to 1971 through the lenses of popular culture, art, architecture, film, design, theatre, music and photography.

Stay in a heritage hotel in Šibenik

The beautiful stone buildings of Šibenik's old town are being reclaimed and transformed into heritage properties and given a new breath of life in the process. King Kresimir Heritage Hotel is a newly opened hotel set in a once abandoned Venetian palazzo in the heart of the old town that now sports a bright red facade.

The luxurious interiors have been lovingly and painstakingly restored, with care taken to preserve original details, including the intricate ceiling frescoes and wooden balustrades. Choose one of eight stylish guest rooms with ensuite marble bathrooms, or splurge and book the King's Suite on the top floor with its rooftop terrace, hot tub and panoramic city and sea views.

Set in a picturesque landscape of rolling hills in northern Istria is the 16th century Belaj Castle and vineyards. Now open to the public, guests are welcome to tour the castle and its vineyards and join one of the organised tastings of the quality wines on offer, paired with Istrian cured ham and cheese.

Sample the 2015 Malvazija Istraksa that won a silver this year at Decanter, or the 2014 Chardonnay that took home a bronze. The on-site restaurant is a new addition to this vast property, with plans for an adjoining summer terrace to open very soon for al fresco dining with a view.

Chill out at Pop Up Summer Garden in Zagreb

Come summer and urbanites are looking for a spot of green to escape from the city bustle. Hidden away in the Tuškanac woods just north of Zagreb's city centre is Pop Up Summer Garden, the perfect urban getaway. Decorated with artwork and lush plants, and with plenty of cosy corners to curl up in and sun loungers to relax on, this is the perfect chill-out place to spend your summer nights.

Everything you need is here: cocktails mixed by the bar staff of Swanky Monkey Garden, snacks served up by Spizza restaurant, and music by popular DJs to set the vibe. A series of concerts is programmed all summer long and an open-air cinema becomes the venue for film festivals. Open every evening (except Mondays) until mid-September, this is the place to be this summer.

Romantic Dubrovnik is well-known for its picturesque fortified old town which attracts scores of visitors and makes it one of Croatia's most visited destinations. Now this seaside city has a quirky new attraction sure to appeal to romantics: the Love Stories Museum. Showcasing the city's romantic side, visitors can learn about romantic local tales and folk legends, as well as more modern love stories through their exhibition of objects donated from around the world. There's a karate belt donated by a man who met his life partner at karate class, and a smart phone contributed by a woman who met her future husband thanks to a problem with her phone! A music room tells the stories of famous couples from the music business and shares details of the stories behind popular love ballads. Visitors can also watch clips of romantic films and TV shows filmed in Dubrovnik or make their own mark on the city by signing the 'love wall' and contributing to 'the most romantic wall in the world'.

Dine among the olive trees at Mediterraneo Secret Garden near Rovinj

The owners of the ever popular sea-facing Mediterraneo Bar in Rovinj have recently created a new dining experience in a relaxed and unexpected setting. Mediterraneo Secret Garden is just a short drive north of Rovinj and set in a scenic landscape of olive groves and vineyards.

A colourful collection of rustic tables and chairs tucked under olive trees and overlooking lush vineyards welcomes diners to this bucolic oasis. On the menu is a gourmet selection of Istrian specialities like home made pasta, truffles, and fresh seafood expertly paired with locally-produced wines.

With a ‎5,835-km-long coastline, the sea is an important part of everyday life in Croatia but issues like pollution and over-fishing increasingly threaten its fragile ecosystem. The aim of aMORE Festival of the Sea (Amore=love in Italian, More=sea in Croatian) is to highlight the environmental, economic, social and cultural importance of marine ecosystems while bringing people's attention to what causes the pollution and degradation of the sea.

Running until the beginning of August, this festival with an important message combines art and culture with science and is the first to be completely dedicated to the sea. A campaign on the use of single-use plastics will be its focus during the month of July, while the festival's highlight is a photography exhibition by Antonello Veneri aptly titled 'Sea: Between Sacred and Profane'.

Designer Outlet Croatia opened to much fanfare at the end of June. Covering 15,000 m2, fashion lovers can browse at over 100 boutiques selling some of the world's best-known designer brands like Armani, Hugo Boss, Guess, Calvin Klein and Karl Lagerfeld. A short drive east of Zagreb, this open-air complex is designed like a mini-city with architecture inspired by the different regions of Croatia.

Where are travel strikes happening in Europe in February?