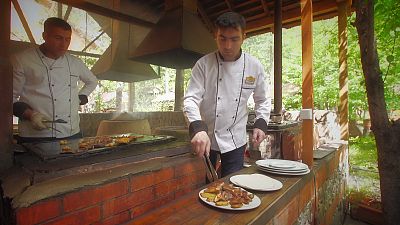 In Azerbaijan the pull of the Caucasus is strong. The mountains attract both Azeris and foreign visitors.

The tradition comes from the shepherds, who cooked their meat with dasarashi, between two slates.

Near Gabala, bears, deer and wild boar are never far away. But the forests hide other unexpected delights… for the taste buds.

For this episode of Postcards euronews‘ Aurora Velez#! is in the forest of Gabala, which is populated by oaks, lime and chestnut trees… and little restaurants, where families and groups of friends come to eat traditional griddle-cooked kebabs in little wooden huts.

Women are in charge of bread; men in charge of meat. Nobody could tell us when this tradition of eating in the forest began.

The chef at Gabala Khanlar, Zahir Musayef, did, however, tell us why the Gabala kebab is so special:

??The tradition comes from the shepherds, who cooked their meat with dasarashi, between two slates.

They take 25 minutes to cook properly.??

Guests eat together, in the intimate atmosphere of the forest. They eat whilst the leaves on the trees tell stories to the rivers, right in the middle of nature, who reminds them, from time to time, that its her who’s in charge.