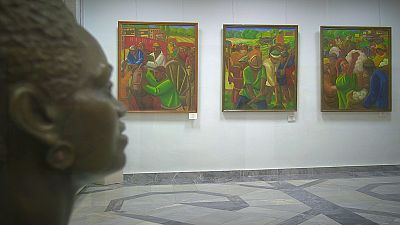 This week in Postcards from Uzbekistan, a treasure trove of forbidden artwork in the country’s northwest.

Many paintings banned by authorities in Soviet times were saved here in a secret collection in the autonomous Republic of Karakalpakstan.

A lot of the work can be seen in this museum in Nukus, which now has the world’s second largest collection of Russian avant garde paintings.

The man who saved the work was a Kiev-born artist and archaeologist, Igor Savitsky, who came here in the 1950s.

“And they include both emerging and known Russian and Central Asian painters.”

But it wasn’t just a mission to save the forbidden art, but also to stress the importance of protecting local history for future generations.

Erekeeva Miyrigul from the Karakalpakstan State Museum of Art told Postcards: “Igor Savitsky saved not only art by Uzbek and Russian painters but also ethnographic art of Karakalpakstan.

“He encouraged Karakalpak people to preserve their art.”

The museum is now home to about 100,000 different items and new exhibition space has recently been added.