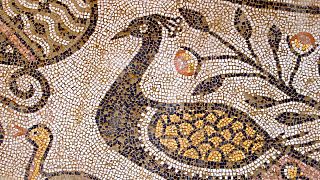 The vast ruins of the ancient city of Stobi have become a major focus for Macedonian archaeologists. Situated in the middle of the country, at the point where the Crna and Vardar rivers join up, the city is considered the most significant Macedonian archaeological site. Stobi’s history can be traced back to the 7th century BC and many treasures have been found since the ruins were discovered in 1861. But more surprises may be in store, as only a fraction of the site has been excavated. Check out our slideshow to see a selection of the beautiful mosaics that have been unearthed so far.