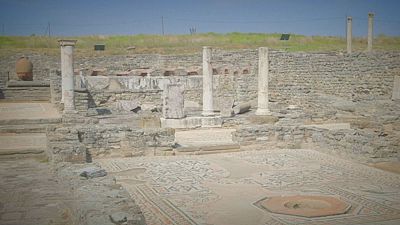 This week in Macedonian Postcards we visit the nation’s most significant archaeological site.

The last thing we found was in 2009; and it was the two-metre sculpture of the Goddess Isis

The ruins of the ancient city of Stobi, in the middle of the country, were discovered in 1861, and its history can be traced back as far as the 7th century BC.

Euronews’ Seamus Kearney reported: “About 1600 square metres of mosaic artwork have been uncovered. But with a large part of the site still to be excavated, it’s hoped many more treasures will be found.”

Stobi had slowly vanished under layers of earth and sand after its life over about 10 centuries, including as a provincial Roman capital, eventually came to an end.

Sanja Todorcheva from the archaeological site told Postcards: “The last thing we found was in 2009; and it was the two-metre sculpture of the Goddess Isis. But that’s not all; 70 percent more of the town is waiting to be excavated.”

Archaeologists continue to dig at the site, their painstaking work slowly adding to the rich collection of ruins that visitors can enjoy.

Glimpses of an ancient city through its remarkable mosaics