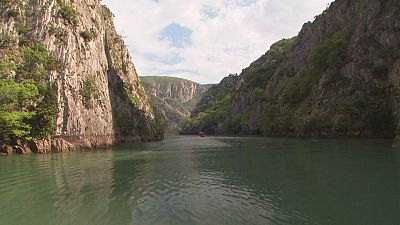 Towering mountains and an untouched landscape as far as the eye can see – in this edition of Macedonian Life we discover an idyllic countryside and learn about traditional fishing on Lake Dojran. But reporter Katrina Kaun started her adventure with a hike through the Matka canyon, descending into its mystical cave.

Just 30 minutes from the capital Skopje lies this jewel of Macedonian nature. It is one of the locals’ favorite outdoor destinations and has a rich flora and fauna.

“The Matka canyon is home to a wide variety of animals and plants, some of which are endemic species – you can only find them here,” says local cave diver Kiro Angeleski.

“The name Matka means womb, creation of life. The atmosphere is somehow mystical and full of positive cosmic energy. People feel relaxed when they come here.”

The Treska river meandering lazily through the canyon is a majestic sight. Among the many hidden treasure here is the famous Vrelo cave.

Millions of years of erosion have produced this geological marvel, carving out weird and wonderful stalactites. But the most stunning part lies underwater. Experts believe it could be the deepest underwater cave in the world.

Kiro Angeleski was the first Macedonian diver to explore it.

“When you enter the darkness it’s like going into another world,” he says. “It’s a tense feeling and you’re extremely concentrated because there’s no room for mistakes when you are diving in a dark cave.”

“When I dive in this underwater cave I always have mixed feelings, all at the same time: fear, happiness joy and excitement,” says Kiro.

Back in daylight we make our way to another enchanting place; the Dojran lake on the border with Greece. Although the country’s smallest tectonic lake is only 10 meters deep it’s brimming with life. It is considered one of Europe’s most life-rich lakes, teeming with 15 different types of fish.

Tome Baltakov has lived in Dojran all his life. The 82- year-old worked for over 40 years as a fisherman. Now he’s passing on his knowledge.

“A fisherman on his own can’t be a fisherman,” he says .“You always need to be two, it’s teamwork. One is throwing the net into the water and the second one is rowing. We have to pull in the net with 30 to 80 kilos of fish and then we take the catch back to the hut.”

In the winter some fish are still caught in the traditional way, using birds such as cormorants. The fish flee before the diving birds and swim towards the nets. Today Gyorgi Stojanov fishes the modern way.

“In the evenings we go out onto the lake and throw the nets into the water and the next day, before sunrise, we pull the nets up,” he tells us. “We take them to the hut, clean the fish and prepare the nets for the next catch.”

Gyorgi goes out on the lake every day, but, he says, it not an easy task: “The life of the fisherman is hard because during the winter we have wind and ice and during the summer we are working in the heat, but I like that very much and it gives me a lot of energy.”

Our journey is now at an end – it has taken us through the world of Macedonian cuisine to the ancient city of Ohrid, passing through the natural paradise of the Matka-canyon and lake Dojran. If you would like to see any of our reports again, check out our website.